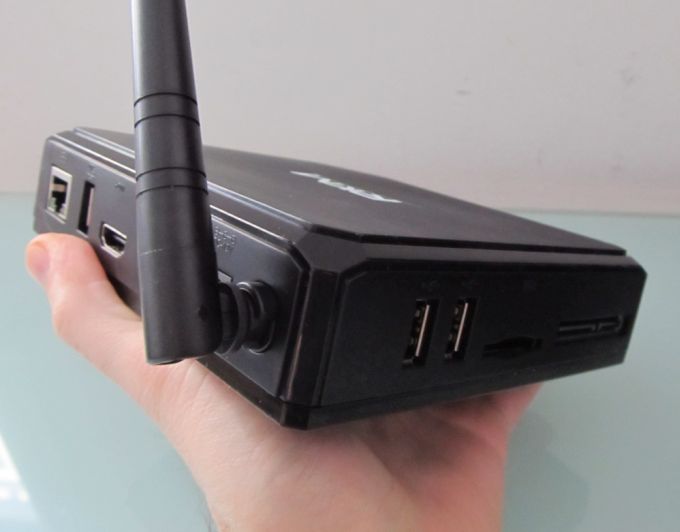 But while there are plenty of devices that let you run Android apps on a TV, the MK80 stands apart thanks to its speedy octa-core processor, speedy 802.11ac dual-band WiFi (and Gigabit Ethernet), and a few other features including a SATA connector that lets you plug in a hard drive.

It has a single USB 3.0 ports, two USB 2.0 ports, a full-sized SD card slot, and an external SATA connector. 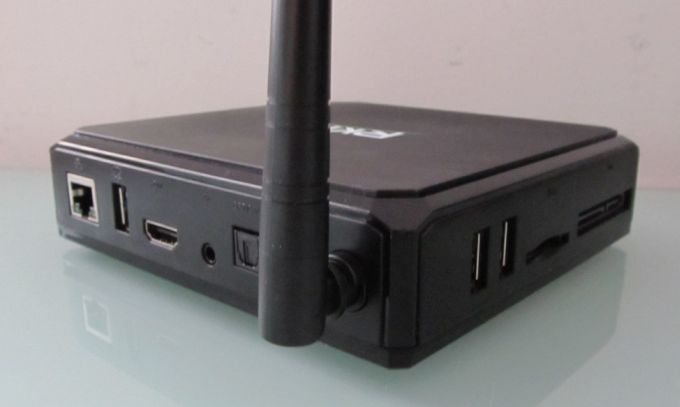 It scores well in benchmarks, downloads content from the internet quickly, and generally offer some of the best performance I’ve seen in an Android-powered TV box. 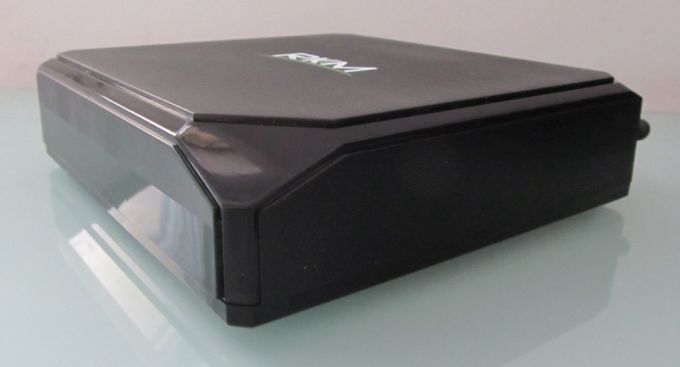 That said, this is a box that runs Google Android 4.4 KitKat software with a custom home screen/app launcher. It doesn’t run Google’s new Android TV software which is designed from the ground up for TVs.

In other words, the user interface can be a bit inconsistent, and there’s nothing stopping you from installing Android apps designed for phones and tablets which may not work well on a TV. 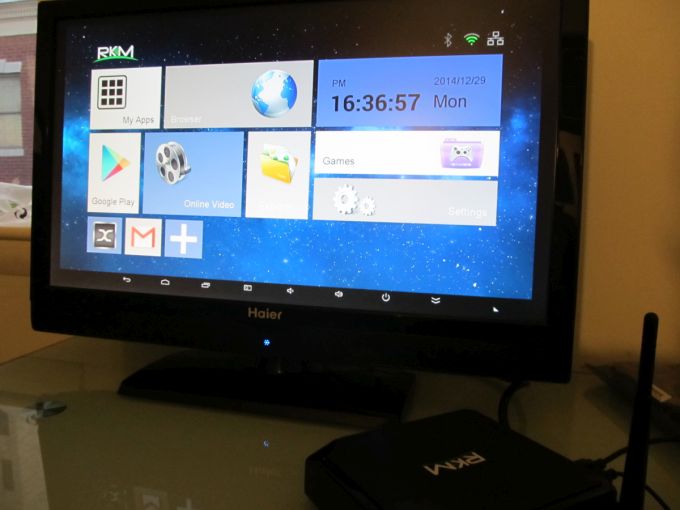 Rikomagic includes an IR remote control that you can use to launch apps, press home, back, or menu keys, and control the volume and media playback functions.

Once nice feature that helps set this box apart from many of its peers is that not only can you shut down the MK80 by pressing and holding the power button on the remote to bring up Android’s power off menu… but when the device is turned off you can switch it back on with the remote control’s power button. 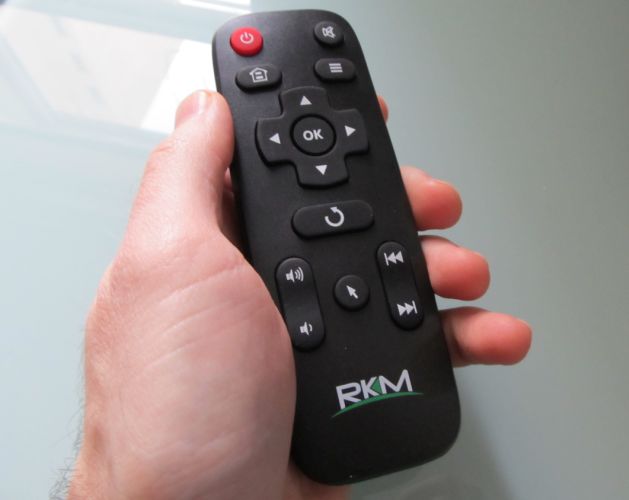 Still, the remote only gets you so far and some apps will be easier to use if you connect a keyboard, mouse, gamepad, or other accessories.

The included remote does have a mouse mode: tap the pointer icon and you can use the arrow keys to slide a mouse cursor across the screen. But it’s much faster to use an actual mouse.

Another thing to keep in mind is that when you are using a mouse, you may be tempted to use Windows-style actions such as right-clicking to bring up context menus. That won’t work. For instance, right-clicking in the web browser takes you back to a previous web page or screen. To bring up a context menu you need to click-and-hold the left button as if you were long-pressing a touchscreen. 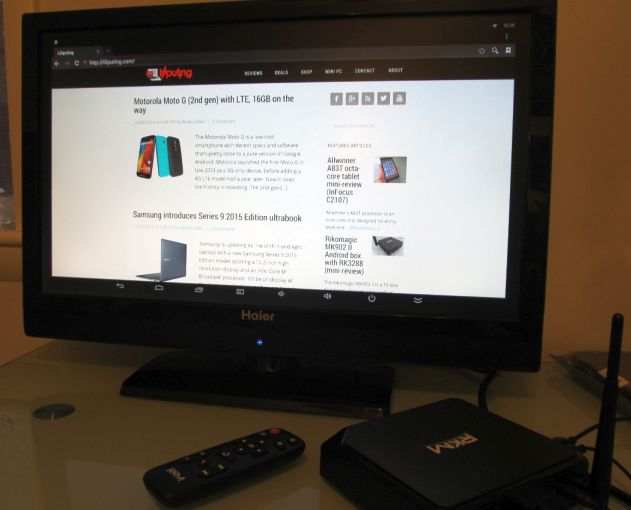 Ultimately, if you’re looking for a device that lets you stream content from YouTube, Hulu Plus, Netflix, Amazon, and other online video sites to a TV you may be better off with an Amazon Fire TV, Google Chromecast or Nexus Player, or some other device designed from the ground up to work with televisions.

What devices like the MK80 have to offer is versatility: you can install just about any app that’s available from the Google Play Store. It’s up to you to decide whether those apps are fun to use without a touchscreen. 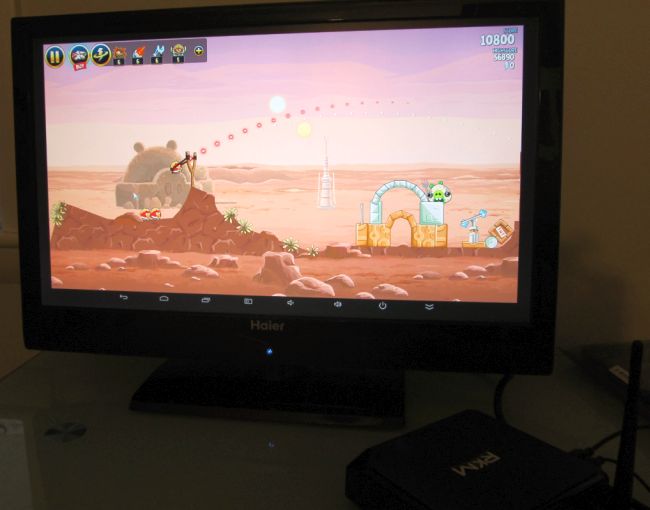 The MK80 is probably one of the most powerful devices of its type thanks to a fast processor, decent wireless performance, and that SATA port which makes it easy to connect a hard drive without a USB enclosure. That can make it easy to use the MK80 not only for streaming internet video, but also for accessing your local music or video collection through XBMC/Kodi media center or other media applications. 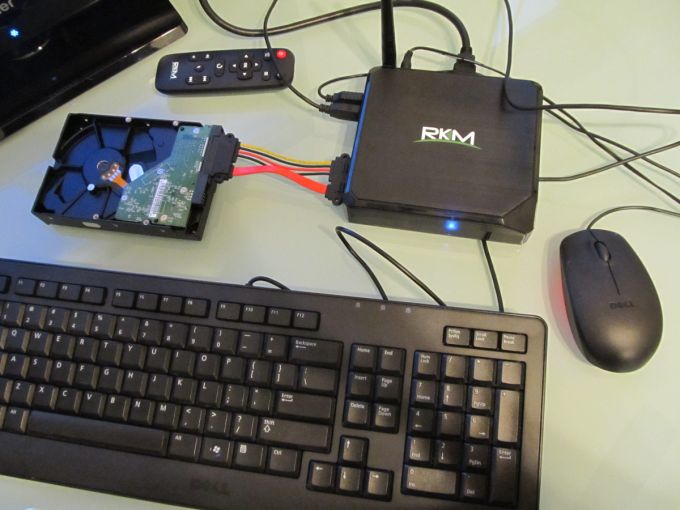 And if you’re not a fan of running Android on a TV, you should be able to run Ubuntu or other GNU/Linux operating systems instead… although you’ll probably need to put in some time figuring out how to get the operating system of your choice to recognize all of the MK80’s hardware features.

The MK80 is the first device with an Allwinner A80 processor I’ve had a change to test, and it’s certainly fast.

Antutu and CF-Bench suggest that the MK80 is faster than TV boxes or tablets with Rockchip RK3288, Qualcomm Snapdragon S4 Pro, or Allwinner A83T processors, although the 3DMark benchmark suggests the box’s graphics processor is a bit more middle-of-the-road. 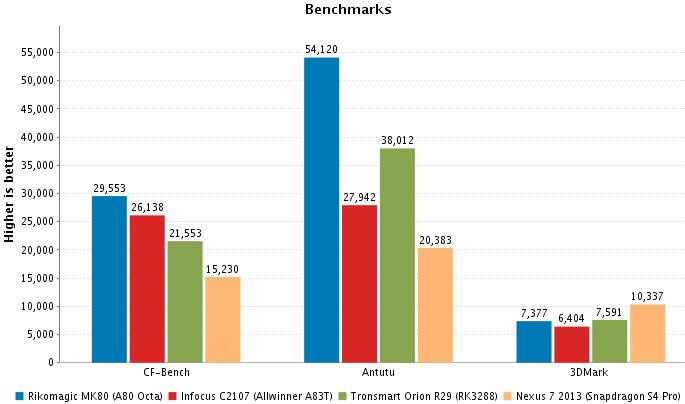 So I decided to compare the MK80’s performance with some more powerful hardware, including the Google Nexus 9 (with an NVIDIA Tegra K1 64-bit dual-core processor), the Nexus 6 (with a Qualcomm Snapdragon 805 quad-core CPU), and devices with Intel Atom Bay Trail and Amlogic S802-H chips. 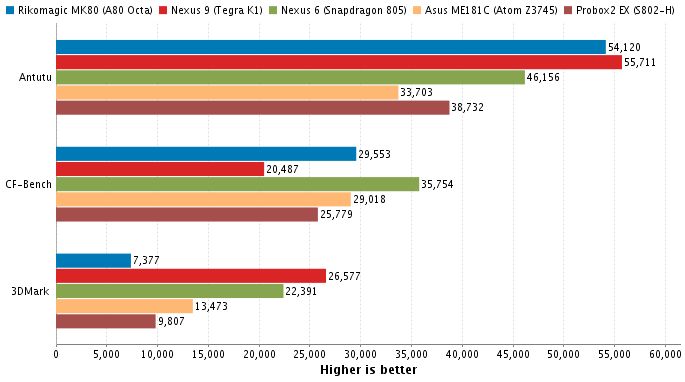 In general performance tests, the MK80 was competitive with the Nexus 9 and faster than just about everything else on the list. But the Nexus 6, Nexus 9, and other devices generally offered much better 3D graphics performance.

OK… so what does all that mean in terms of real-world performance? 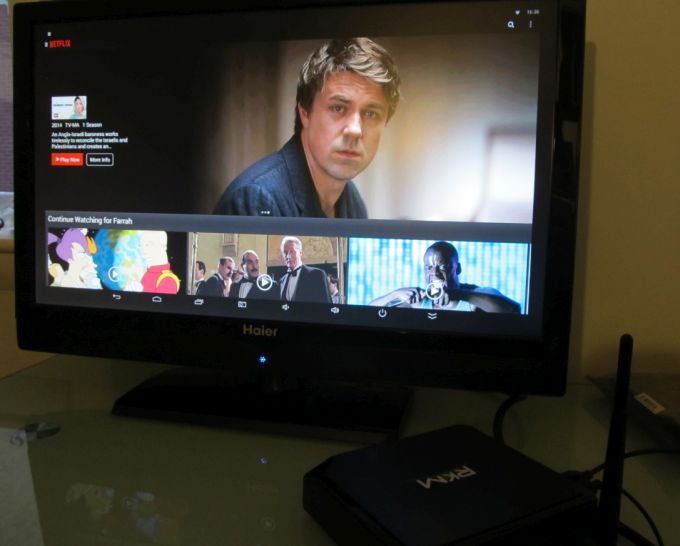 The MK80 boots quickly, handles 1080p HD video in a range of formats whether you’re playing from local storage or streaming over the internet, and should be able to handle most Android apps and games: because while there are some devices with faster processors, most app developers are aiming for the lowest common denominator. Since most people have phones, tablets, or other devices with slower hardware, most apps don’t need a super-speedy processor or up to 4GB of RAM. 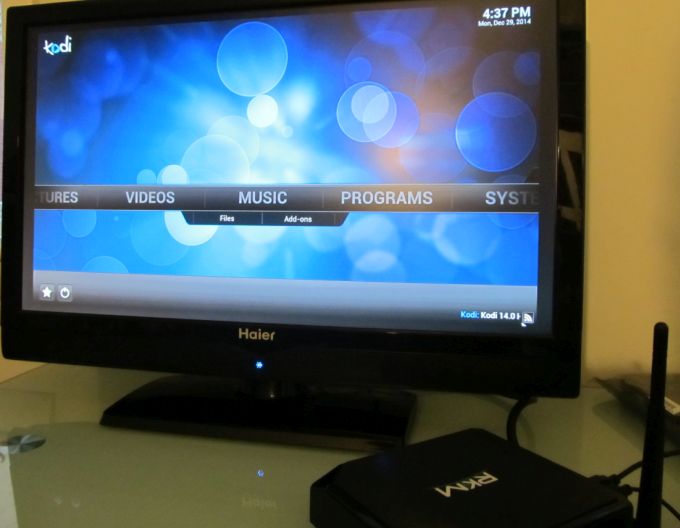 Still, the extra RAM and processor speed come in handy when launching apps, multitasking, or switching between apps. The MK80 never felt particularly slow during my tests. 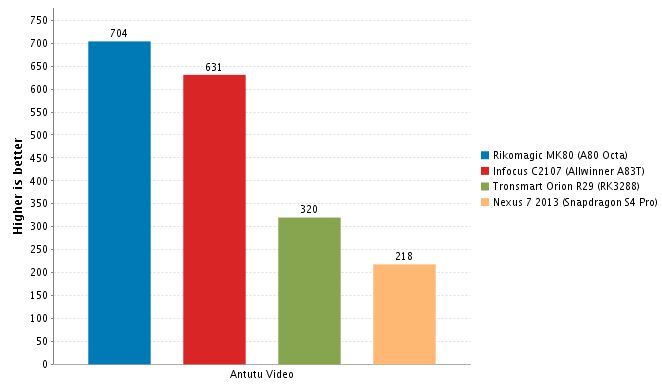 On the other hand, there are some things the device struggles with. While Rikomagic says it should be able to play 4K video, I haven’t actually managed to find an app that would play a 4K/HEVC version of the Blender Foundation’s Tears of Steel properly using software or hardware decoding.

If you’re just looking for a device to let you stream online video to your TV, you can buy an Amazon Fire TV Stick for about 1/4th the price of an MK80. It may not be as powerful, but it’s a lot easier to use since the entire user interface is designed to be navigated with a remote control and you won’t accidentally install apps that expect you to have a touchscreen display. 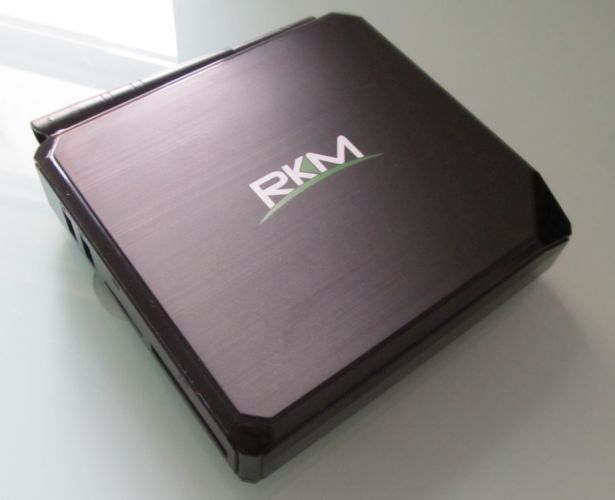 But if you’re looking for a device that doesn’t have training wheels, the MK80 can run just about any Android app, has a wider selection of input options than most devices in this category, supports Gigabit Ethernet, USB 3.0, and 802.11ac WiFi, and even comes pre-rooted.

Overall, the MK80 is a pretty solid example of a powerful TV box that runs Android software. I’m just not convinced that this category of device is all that useful at a time when you can pick up a Roku, Chromecast, or Fire TV Stick for under $50 or a Windows-powered mini PC with an Intel processor for under $100.