Chinese device maker Pipo has unveiled a new device that it’s calling an Intel TV box, but which could also be described as a tiny desktop computer.

The Pipo X7 features an Intel Atom Bay Trail processor and runs Windows 8.1 with Bing. Sure, you can plug it into a TV to stream content from YouTube, Hulu, or Netflix. But you can also run Office, Minecraft, Firefox, or any number of other Windows apps. 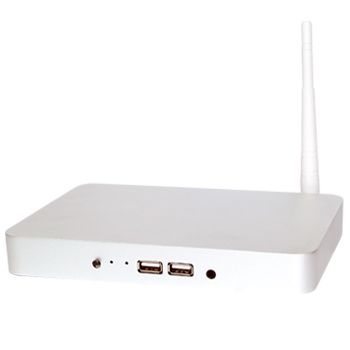 There’s always been a thin line between a full-fledged computer and a media streaming device. Sure, Roku or Chromecast devices don’t exactly look like computers but they have processors, memory, operating systems, input and output.

Over the past few years Chinese companies like Pipo, Rikomagic, and Tronsmart have blurred the lines a bit more by offering Android-powered TV boxes that can run just about any app you can run on a smartphone or a tablet. The reason I started paying attention to the space a few years ago is because you can turn many of those Android-powered TV boxes into Linux desktop computers by running Ubuntu or another GNU/Linux distro from an SD card or internal storage.

But now that companies are starting to sell models with Intel chips and Windows software, there’s no real doubt that these little boxes are just as much computers as they are media streamers.

Pipo hasn’t revealed pricing for the new X7 yet, but it will be available with an Intel Atom Z3735F or Z3736F quad-core processor, 2GB of RAM, an unspecified amount of flash storage, an Ethernet jack, 802.11b/g/n WiFi, Bluetooth, HDMI output, a microSD card slot, and 4 USB ports.

The box measures 7.4″ x 5.1″ x 1″ and weighs about a pound. It’s not the only tiny Windows desktop we’ve seen lately. Asus has a $149 VivoMini on the way, The MeegoPad T01 is a stick-style Windows PC that sells for $100, and I recently reviewed the Zotac ZBOX PI320 pico, a tiny desktop Windows system that sells for under $200.

You an also pick up an ECS Liva mini-PC kit with an Intel Celeron N2807 for as little as $110 during Newegg’s holiday sale… but that price doesn’t include an operating system.

16 replies on “Pipo X7 is a Windows-powered TV box”