Say you’re a fan of good old fashioned analog watches, but you kind of like the idea of being able to view notifications, track fitness stats, and control music playback using a wrist-worn device.

Kairos has an interesting solution: keep your old watch, but replace the wrist strap with a smart band. The company is raising funds to launch a line of Kairos T-bands through crowdfunding site Indiegogo.

If the bands ship in April as expected, they’ll sell for $199 and up. But backers of the campaign can try to reserve one for a much lower price. 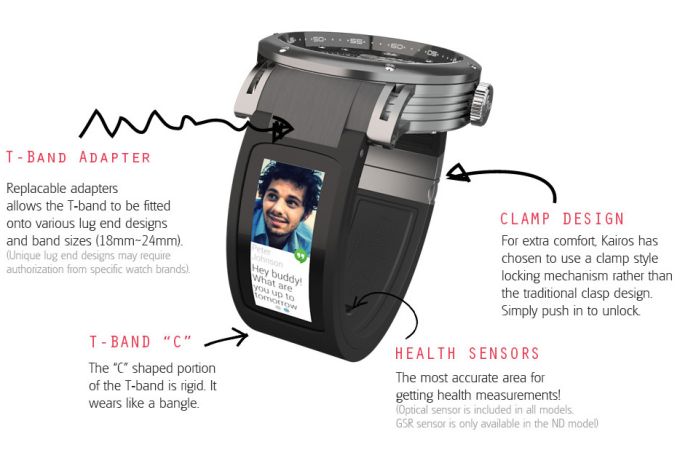 Using a special strap to add “smart” features to a watch is sort of like using a Roku to turn a standard TV into a smart TV without buying a set that has smart TV functions built in. You don’t need to replace the watch (or TV) you love and if the smart hardware or software feels obsolete in a few years you can upgrade without replacing the watch (or TV)… assuming there’s a compatible smart strap available in a few years.

Ordering a Kairos T-Band won’t save you a lot of money: the straps have most of the functionality of a full-fledged smartwatch and are priced like smartwatches.

The entry-level Kairos T-Band ND (the one that will have a suggested retail price of $199) doesn’t even have a display. This model has a vibrating motor and multi-color LED for notifications, sensors for fitness tracking, and up to 7 days of battery life.

Kairos has a second model called the T-Band HD (Hidden display) which has a list price of $249, but which is going for $179 on Indiegogo. This model is expected to ship in June and features LED panels built into the wrist band. When the screens are off, the band looks like the T-Band ND. But they can light up to provide notifications at a glance.

The T-Band OD has a PMOLED display, a touch sensor, and a microphone for voice input. It’ll eventually sell for $299, but campaign backers can try to snag one for $199.

Both of the models that feature displays have 200mAh batteries which should provide 2-3 days of battery life.

The bands feature ARM Cortex-M4 processors and Bluetooth low energy, support for push notifications from smartphone apps, features that let you use the T-bands to trigger photos from your smartphone or perform other remote control functions, and fitness tracking features powered by Misfit.

Kairos says the T-bands are designed to support a few mechanical and analog watches that the company is also offering through Indiegogo. But the team also plans to offer adapters that will let you attach the straps to a number of other watches from other manufacturers.

If you’re looking for a cheap smartwatch, there are certainly other options available: you can pick up a Pebble for as little as $100 (or less). And if you don’t want to wait months to get your hands on a smart wearable, there are plenty of Android Wear devices available today.

But for watch afficianados who just don’t think the current crop of smartwatches are up to snuff, the Kairos T-Band could be an interesting compromise.