The Amazon Fire Phone is a smartphone with a 4.7 inch display, a Qualcomm Snapdragon 800 processor, 2GB of RAM, a 13MP camera, and up to 64GB of storage. It also has an unusual set of features called Dynamic Perspective which uses eye-tracking and gesture detection to provide a 3D-like experience on a 2D screen.

But one thing the Fire Phone doesn’t have is access to the full Google Play Store… at least not officially. But now there’s an unofficial way to install it on some Fire Phone models. 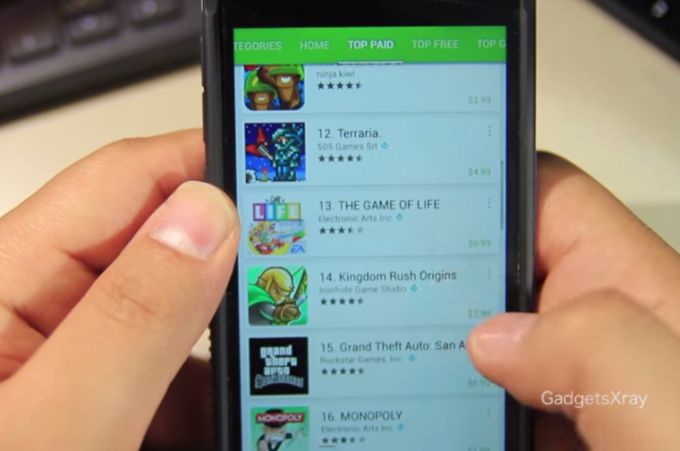 The phone ships with Amazon’s Fire OS, which is a custom version of Android with Amazon’s custom user interface, digital content and app stores, and cloud storage. The Amazon Appstore features tens of thousands of apps, but the Google Play Store which is available for most other Android-based smartphones offers over a million apps and many developers make app updates available through the Play Store much sooner than they’re available from the Amazon Appstore.

Since the Fire Phone runs a fork of Android, it’s not certified to use Google Mobile Services, which means it doesn’t include the Play Store, Gmail, or other official Google apps such as YouTube and Google Maps.

But GadgetsXray has posted a video showing how you can install the Play Store yourself.

Before you try this, there are a few things to keep in mind:

It’s possible that’s just one caveat, not two: right now Fire OS 3.6.8 only seems to be available for unlocked devices. It’s also not clear if Amazon will issue an update in the future that breaks the Play Store.

That said, if you want to give things a try, you can download a series of files that you’ll need to sideload on the Fire phone including Google Account Manager, Google Play Services, Google Play Store, and Google Services Framework.

Install them in the same order as shown in the video and you should be able to install Play Store apps on the Fire Phone.

The good news is you don’t even need to root your phone to install the Play Store.

If you managed to pick up a Fire Phone when it was on sale for $220 or less this holiday season (before Amazon’s sale ended and the price returned to $449), this could make your phone a lot more useful. I suppose it also makes your phone more useful even if you paid full price… but I’m not sure why you would have done that.