The chip maker unveiled the processor in September, and tablets featuring the chip should begin shipping soon. Allwinner sent me one of the first of those tablets to test. 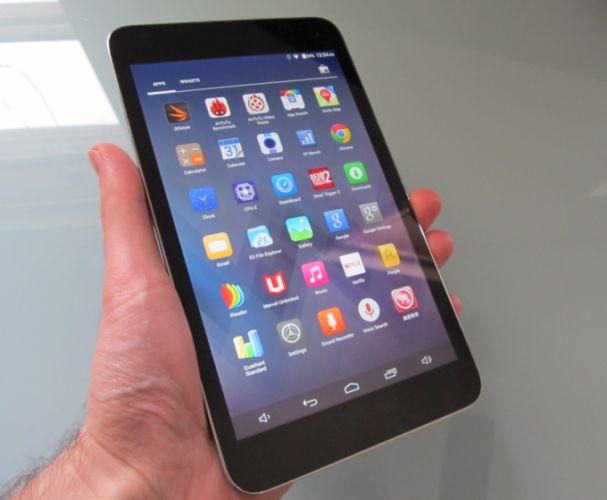 After running some tests on the tablet, it seems to handle games, videos, web browsing, and other basic tasks pretty well. It’s certainly not the fastest Android device I’ve ever used… but it’s far from the slowest.

In fact, the InFocus C2107 comes out ahead of the 2013 Google Nexus 7 in most performance tests.

Since I don’t know how much this tablet will cost or if this model will ever actually go on sale, it’s tough to give it a full review. But here are some thoughts on the first device with an Allwinner A83T processor that I’ve tested.

The InFocus C2107 is a reasonably compact machine: it has a 7 inch full HD display just like last year’s Nexus 7 tablet. But this tablet is a little smaller than the Nexus 7 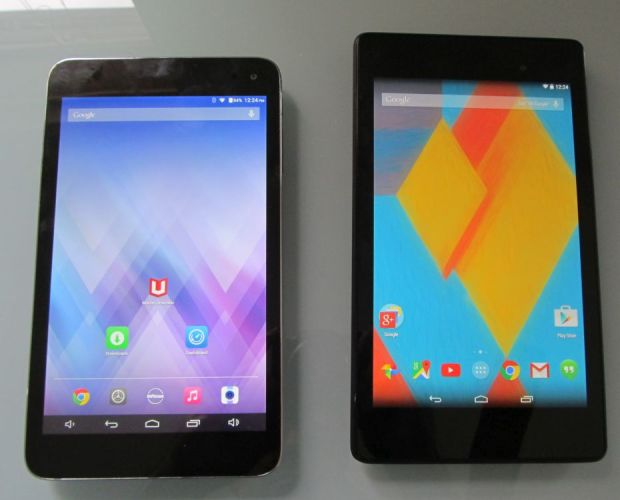 It also has a more unusual layout. All of the ports are at the top of the device. That’s where you’ll find the headset jack, microSD card slot, and micro USB port. 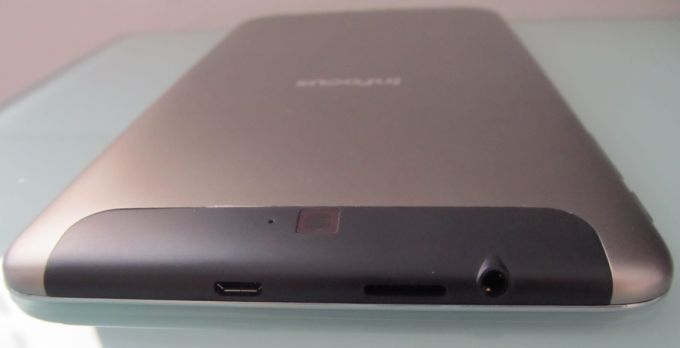 At the bottom there are stereo speakers facing the back of the tablet. They’re arranged to provide stereo sound while you’re holding the tablet in portrait mode though, not landscape.

The tablet has an 8MP rear camera and 1.9MP front-facing camera. The system is powered by a 3550mAh, 13.49 Wh battery that seems to hold a charge pretty well: I left the tablet unplugged overnight and the battery level only dipped from about 99 percent to 95 percent.

The model Allwinner sent me shipped with Android 4.4 KitKat software with Chinese set as the default language. After changing the language to English, I noticed a few unusual things about the system. 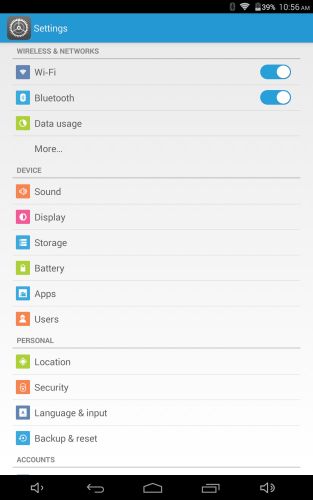 First, it has a custom Android skin which includes a bright theme for the Settings menu, an unusual Quick Settings panel with options for screenshot and screen recording, among other things, and volume buttons in the soft keys area (even though there are physical volume buttons on the side of the tablet). 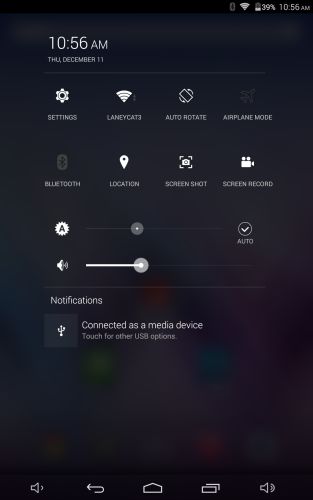 There’s also a custom app launcher which separates software into apps and widgets — and which includes an app store button in the upper right corner. When you tap that button you have the choice of visiting the Google Play Store or a Chinese app store. 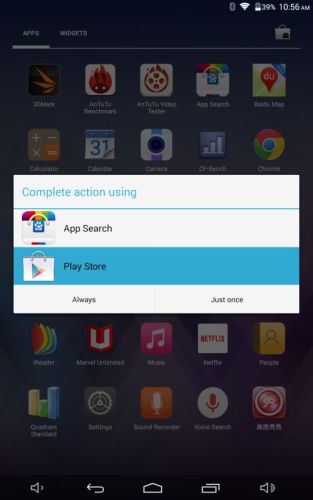 Interestingly there’s no other icon for the Play Store, and there are no other Google apps (such as Gmail, Maps, or YouTube) preloaded, which suggests to me that this tablet might not actually be a Google Mobile Services certified device.

It’s not Allwinner’s first 8-core chip. The company also has an A80 chip which features 4 ARM Cortex-A15 and 4 ARM Cortex-A7 cores. 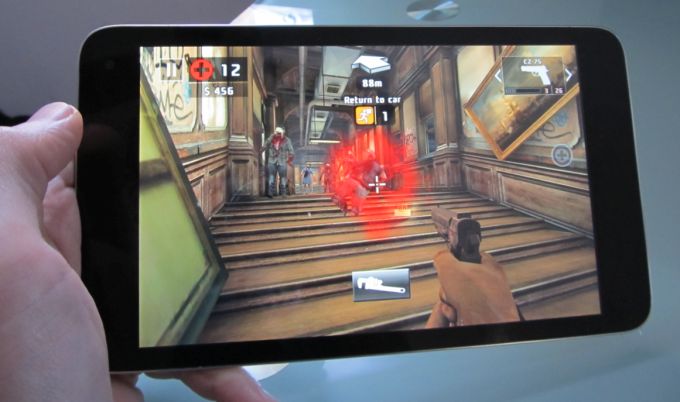 The A83T is a lower-performance chip which will probably show up primarily in more affordable tablets, TV boxes, and other devices.

So how does it stack up against the competition? As I already mentioned, it comes out ahead of the 2014 Nexus 7 tablet in most benchmarks. That tablet is powered by a Qualcomm Snapdragon S4 Pro processor.

Benchmark results are a bit more mixed when you compare the Allwinner A83T against devices with Rockchip RK3288, Intel Atom Z3745 or Amlogic S802-H processors. 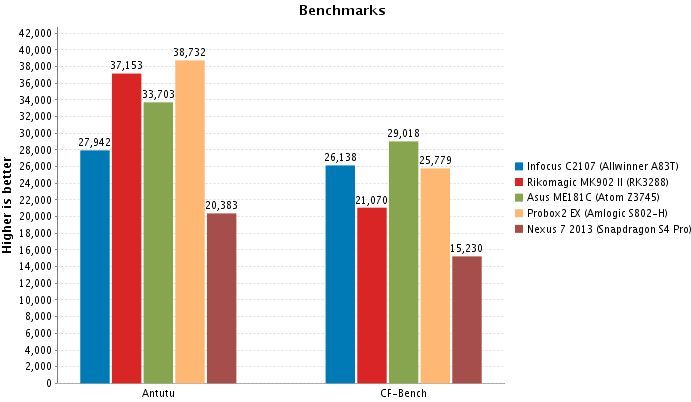 As the chart above shows, devices with each of those chips outperformed the InFocus C2107 in the Antutu benchmark, but the InFocus tablet did a better job of holding its own in CF-Bench.

These tests look at raw horsepower, but to be honest, all of these chips are pretty speedy and it’s pretty tough to tell real-world performance apart from one to the next.

Here’s what you need to know about the performance of the InFocus C2107: It handles 3D games, HD video playback, and other tasks smoothly. It boots relatively quickly, seems to get reasonably long battery life, and the processor has no trouble pumping out graphics to the 1920 x 1200 pixel display. 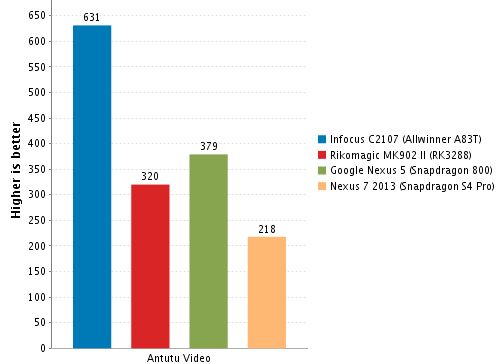 The chipset also does a decent job with a range of video formats. I recently started using Antutu’s Video Tester app (so I don’t have scores for some devices I tested a while ago), but the InFocus tablet comes out ahead of models with Rockchip RK3288, Qualcomm Snapdragon 800, and Qualcomm Snapdragon S4 Pro chips in this video performance test. 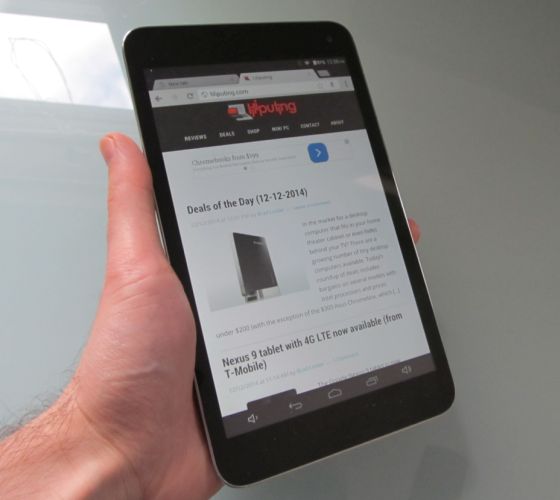 I also had no problems streaming content from YouTube and Netflix, reading comic books using the Marvel Unlimited app, or surfing the web.

The speakers are reasonably loud and the screen is sharp and bright. For the right price, a tablet like the InFocus C2107 could be quite attractive.

I’ll be curious to know how much tablets like this will cost… but it might be worth noting that the DHL invoice on the box I received suggested the package had a value of $170.