Google Android may be designed to show one app at a time in full-screen mode, but Samsung, LG, and other companies have been offering custom software that lets you view more than one app at a time.

Now Acer is joining the multi-window part with a new feature called Split Screen. It lets you view two apps at once on an Acer Iconia Tab 8 Android tablet. 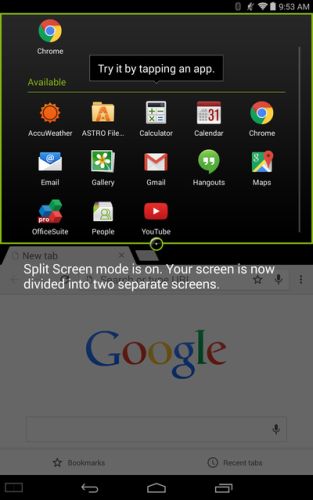 While the tablets aren’t much bigger than an iPad mini, they are bigger than most Android phones. So if you turn the tablet sideways you have a screen that’s just about the size of two small (and wide) smartphone screens put together.

Split Screen lets you sort of treat it like two screens by running two apps side-by-side. Or you can use Split Screen in portrait mode with one app stacked on top of the other.

This lets you, for instance, watch a video while surfing the web. Or keep Facebook open in one window while visiting the app drawer to find another app you want to load.

You can also drag the line separating the apps to resize each window so that they’re both the same size or one is larger than the other.

TabTech has a video showing Split Screen in action. The video is in German, but it gives a pretty good overview of how the feature works, whether you speak the language or not.

via Android Central and TabTech