The MeegoPad T01 is a tiny PC-on-a-stick with an Intel Atom Bay Trail processor, 2GB of RAM, and Windows 8.1 software. It sells for around $100 and up.

Update: Note that at least some versions of this stick ship with an unlicensed version of Windows 8.1, which means you’ll need to either supply your own operating system or pay for a Windows license.

Just plug the stick into the HDMI port of a display, connect a power source, and you’ve got a desktop computer (with the processing power of a cheap Windows tablet).

But what if you’d rather run Ubuntu? Yep. You can do that. 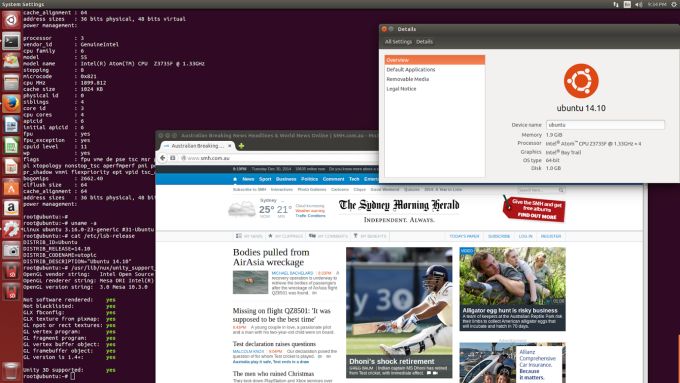 Ian Morrison recently picked up a MeegoPad T01 (also known as an APM-D01) and got to work trying to bring GNU/Linux to the little computer.

So far he’s managed to get Ubuntu 14.10 up and running, complete with support for Intel HD graphics and support for HD YouTube video playback.

Morrison hasn’t described the steps he took to load Ubuntu on the device, but I suspect that it’s a lot like the process for running Ubuntu on the Asus Transformer Book T100 and other Bay Trail-powered Windows devices: you typically need to use a 64-bit build of Ubuntu with a 32-bit bootloader.

While that’s not the most elegant way to install an operating system, it may be better for some users than trying to shoehorn Ubuntu onto ARM-based mini-PCs that often lack support for hardware-accelerated graphics.