German electronics company Medion is now offering an inexpensive box that lets you stream content from your phone or table to a TV.

It’s called the Medion Life ZoomBox P89230, and it’s available in France or Germany for 35 Euros, which is about $44 US. 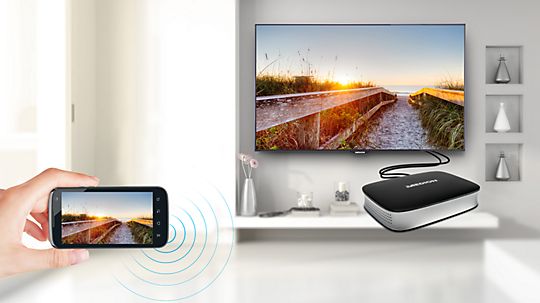 While it’s tempting to think of the ZoomBox as a Chromecast or Roku-style device, it’s actually a bit different. It doesn’t actually pull content from the internet and you can’t use it with a remote control.

Instead, you can use it to mirror your phone or tablet display using Miracast, WiDi, or DLNA technology. This lets you use your phone to find photos, videos or other content and beam them to your TV simply by bringing them up on your phone’s screen. You can also use your TV as a secondary display while you’re playing games, surfing the web, or performing other activities.

In other words, it’s basically a wireless display adapter that turns your TV into a second screen for your phone.

Medion offers a mobile app that lets you configure a ZoomBox on your network. It should also work with any devices that support WiDi or Miracast wireless display including systems running Windows 7 or later and Android 4.2 or later.