Now it looks like that could be set to change… or not. 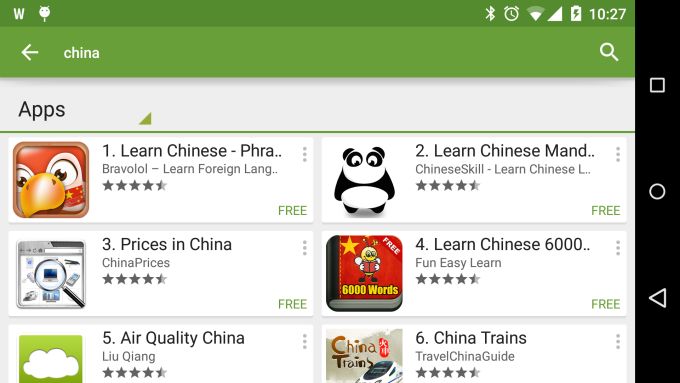 Google hasn’t officially confirmed any plans to bring the Play Store to Chinese devices, but The Information reports that Google’s looking into offering device makers the option to include the Play Store on devices sold in China.

The Chinese version of the Play Store might look different from the version you find in other markets: you might be able to use it without a Google account, and some apps might not be available for instance.

Google and China have a complicated relationship, which is part of the reason Android phones sold in the country tend to lack Google Mobile Services. But since the core Android operating system is open source, a number of third-party solutions have risen to take its place and that’s led to companies such as Xiaomi, Meizu, and Oppo offering their own custom versions of Android with suites of apps to replace the Google Play, Gmail, Maps, and YouTube apps Google offers in other regions.

While Google’s not ready to make any announcements about bringing its app store to China, the company this week did announce that Android app developers in China can now submit free and paid apps to the Play Store. That means Chinese developers can now get paid when users from around the world buy their apps from the Play Store… they just won’t be able to use the Play Store to sell phones to folks living down the street.

3 replies on “Google Play might be headed to Chinese phones”