Amazon launched its first smartphone this summer, charging $199 for an Amazon Fire Phone with a 2-year contract or $649 for a contract-free model.

The phone didn’t sell well, and Amazon dropped the price by about $200 in September.

Now the company’s offering an even better deal: You can pick up an unlocked Amazon Fire Phone for $199. And that price includes a 1-year Amazon Prime membership… something that normally goes for $99. So it’s kind of like getting the phone for just $100. 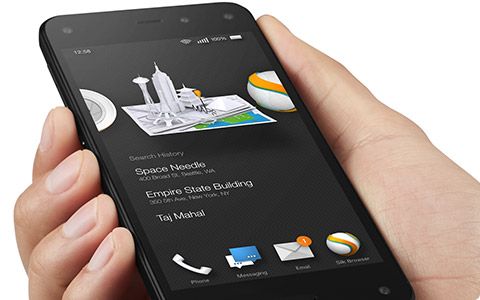 The Fire Phone is an unusual device. It has the specs of a decent Android phone from 2013, including a 4.7 inch, 1280 x 720 pixel display, a Qualcomm Snapdragon 800 quad-core processor, 2GB of RAM, 32GB of storage, and a 13MP camera with optical image stabilization and HDR photo support.

But the phone runs Amazon’s custom version of Android called Fire OS. You can get apps, music, movies, eBooks and other content from Amazon but not from the Google Play Store. There’s also Amazon’s Firefly feature which lets you tap a button to recognize text, images, or audio… primarily for shopping. See an object you want to identify? Just hit the button and point your camera and Amazon will try to identify it… and let you know if you can buy one.

That’s not the only thing that’s unusual about the phone though. It also has a series of cameras and sensors that enable something Amazon calls “dynamic perspective,” which is to say that some apps, wallpapers, and games can track your face and eyes and adjust accordingly to provide a 3D or parallax effect.

Update: While only AT&T sells this phone on-contract, the unlocked model being offered by Amazon is a GSM phone that should work with AT&T, T-Mobile, and MVNOs such as Straight Talk and Cricket Wireless.

Amazon’s Fire Phone has gotten mixed reviews at best… but now that you can pick up an unlocked model for just $199 and get a year of Amazon Prime (with free 2-day shipping, access to thousands of streaming movies and TV shows, and millions of songs via Prime Music streaming) it could make a decent alternative to an iPod touch — even if you don’t have any plans to actually use the Fire Phone as a phone.

Or you could just buy the Amazon Fire HD 6 for $99. That’s Amazon’s 6 inch Fire OS tablet with a 1280 x 800 pixel display, a 1.5 GHz quad-core processor, and generally less impressive specs than the Fire Phone. Still, it might be a better option if you really just want a cheap portable media player.