The 10moons D9i is a small box that you can plug into a TV to run Android apps. But this 4.2″ x 4.2″ x 1.1″ box which sells for about $82 in China isn’t only good for running Android apps. It has the guts of a cheap Windows PC, and there’s even a software download that lets you switch the operating system from Android to Windows.

In other words, you can use the 10moons D9i as a media streaming box for your TV. But you could also use it as a full-fledged, low-power Windows desktop. 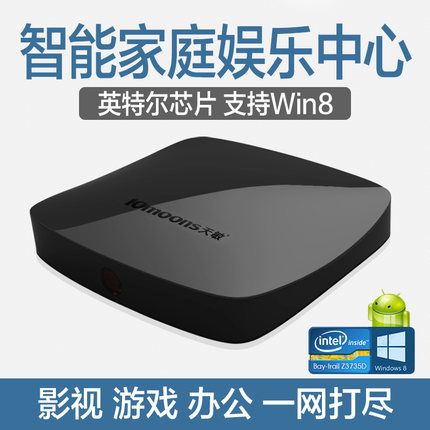 I haven’t actually tested this device… and it’s unusual for a Windows installer to be distributed through a third-party website like this. So if you happen to find a way to buy this box outside of China, proceed with caution — it’s not clear if this is a fully licensed

Still, with a growing number  of Android tablets and TV boxes shipping with Intel Atom x86 processors, it was just a matter of time before we started to see companies offer users a choice of operating systems.

If you’re looking for a device with official Windows support you might want to check out the Zotac ZBOX PI320 or the upcoming Windows version of ECS Liva mini PC. Word on the street is that ECS will launch that model in Japan in December, but I haven’t seen an official launch date for a US version yet.

via Cngadget and CNX Software