The developers behind open source media player VLC have released a second major version of their Windows Store app.

VLC 0.1.0 picks up where the initial VLC beta left off earlier this year, providing a full-screen, touch-friendly user interface for finding and playing music and videos.

The update brings a new user interface and performance and stability improvements. 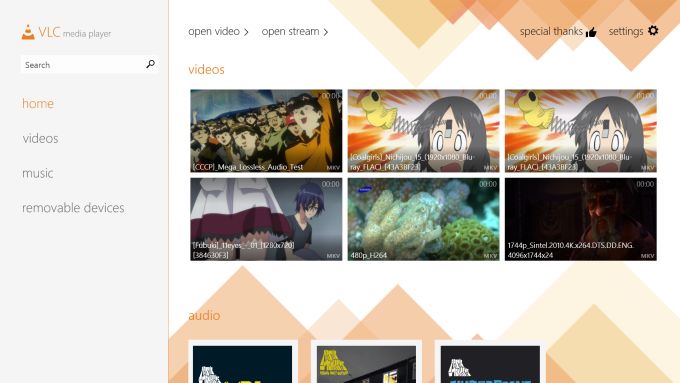 The team is also working on bringing VLC to Windows RT so it can run on tablets with ARM-based chips like the Microsoft Surface 2 and Nokia Lumia 2520. But that version’s not ready to go yet.

VLC 0.1.0 requires Windows 8.1 or later. It won’t run on Windows 8. And it clearly won’t run on older versions of Windows which don’t include the Windows Store at all. You can still install the desktop version of VLC on those systems… or on Windows 8.1.

Among other things the latest version of VLC uses the libVLC 2.2.0 core, uses Winsock instead of WinRTsock for networking, and uses Universal Windows app code so that this version can eventually be ported to run on Windows Phone as well as Windows 8.1 and Windows RT.

The new user interface includes a dual-panel layout that makes it easier to switch between categories including home, videos, music, and removable devices.

The app also supports Microsoft’s Windows 10 technical preview, which allows you to run VLC in full-screen or windowed modes.