Like the idea of a wearable display that lets you interact with your phone, but wonder why it needs to have a separate brain?

Google Glass is leading the way in the wearable face computer space, and the $1500 device basically puts the guts of an Android phone on your head so that it can project text, pictures, video, and other graphics on a small prism just above your eye.

Toshiba Glass is a much simpler device that’s basically a wearable, external display for the smartphone in your pocket. It’s expected to launch in 2015, and it’s expected to be much more affordable than Google Glass. 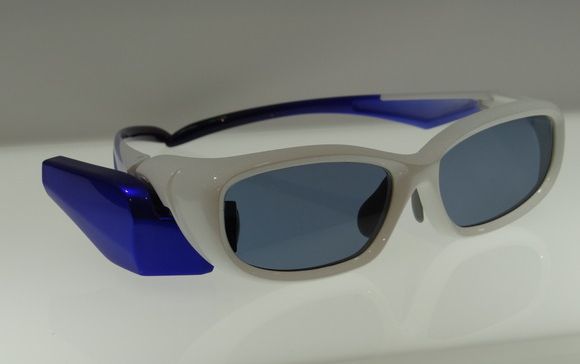 That’s partly because Toshiba Glass has no battery and no wireless communication features. It’s basically a projector attached to a pair of glasses. The projector beams content to the lens of the glasses rather than to a separate prism, but the whole system only works when it’s connected to your smartphone with a cable.

In other words, your phone does all the heavy lifting while Toshiba Glass lets you interact with smartphone apps in new ways.

For instance you could view health data in real-time while using fitness apps, get directions while driving, or view instructions while working in the field.

With a cable connecting Toshiba Glass to your phone at all times, it’s tough to imagine anyone wearing a device like this 24/7. But for the right price, it could prove attractive as a device that you’d use just in certain situations. For instance it could help mechanics look up diagnostic data without getting their phones dirty, or help health care professionals view charts without breaking eye contact with their patients (well, without breaking it too much, anyway).

Ultimately, it’s too early to say whether face computers are the future or not. But with Google Glass leading the way, it’s not surprising that companies including Toshiba, Samsung, and Lenovo have all begun working on their own head-mounted wearables just in case they turn out to be the next big thing.

Toshiba’s showing off an early prototype of its Glass device at the CEATEC show in Japan, where it was spotted by reporters from PC World and AFP.

4 replies on “Toshiba Glass is like Google Glass, but less so”