The Samsung Gear S is a smartwatch that you can use to make phone calls or surf the web without first pairing the watch with a smartphone. You can still pair it with a phone to receive notifications on your wrist, but what makes the Gear S unusual is that you can use it with or without a phone.

Samsung introduced the watch in August and it’ll be available for purchase in the US starting Friday, November 7th. 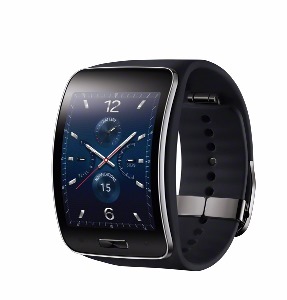 The Gear S runs Samsung’s Tizen-based smartwatch software and it supports a number of third-party apps. You can also use it to make or receive phone calls or text messages and read and send email messages.

Sprint says it’ll provide Gear S users with a phone number specifically for the watch/phone, but you can forward calls from your phone to your watch to answer calls even when your phone isn’t around.

It has a heart rate monitor, accelerometer, gyroscope, ambient light sensor,and an IP67 water and dust-resistant case. The watch has a 300mAh battery.

The Gear S features Samsung’s S Voice software for voice actions including search and in a lot of ways, it’s basically a smartphone that you wear on your wrist. But it’s one that Samsung and Sprint are still positioning as a companion to your normal phone.

Sprint and AT&T, for instance, suggest adding the watch to a family share plan for $10 per month while T-Mobile is introducing a new wearable plan at just $5 per month. Those low rates are only available for customers adding the S Watch to an existing plan.