NEC has unveiled a new 2-in-1 tablet with an Intel Core M Broadwell low-power processor. The NEC LaVie U is a tablet with an 11.6 inch, 1920 x 1080 pixel display and an option for an active digitizer with support for a pressure-sensitive digital pen.

The tablet comes with a keyboard dock that lets you use the computer as a notebook. And like most NEC computers, you probably won’t be able to buy it outside of Japan anytime soon. 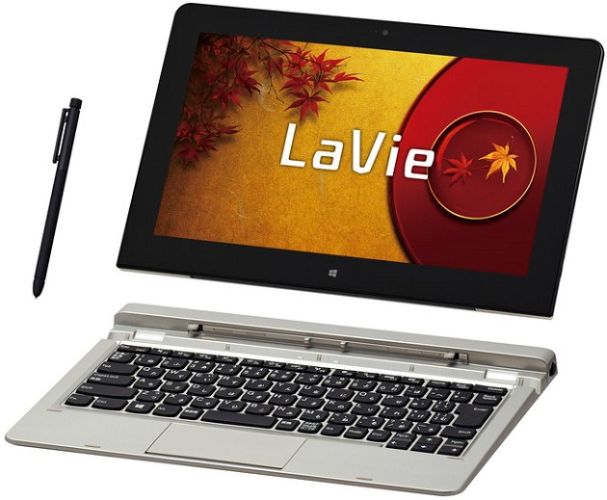 The NEC LaVie U tablet has 4GB of RAM, 128GB of solid state storage, an IPS display, WiFi, Bluetooth, USB 3.0, HDMI, and microSDXC card ports and front and rear cameras. NEC says the tablet should get up to 8.2 hours of battery life.

A model with a digital pen and active digitizer capable of recognizing 1024 levels of pressure will weigh about 1.81 pounds, while the pen-free model is a bit lighter at 1.75 pounds. The tablet measures less than 0.4 inches thick.

The keybaord dock adds another 1.2 pounds, which means that even when you use the keyboard and tablet together, the combined notebook should weigh less than 3 pounds.

via PC Watch and Engadget Japanese

5 replies on “NEC launches LaVie U 2-in-1 tablet with Intel Core M, pen support (in Japan)”