Android Wear smartwatches don’t include on-screen keyboards, because it’s easier to enter text using voice recognition than it is to type on a device with a 1.6 inch screen. But what do you do if you’re in a noisy environment where your watch might not recognize your voice? Or how about a quiet space like a library where it might be appropriate to speak out loud?

Microsoft Research has released an early prototype of an Android Wear app that lets you draw letters on the screen to enter text. 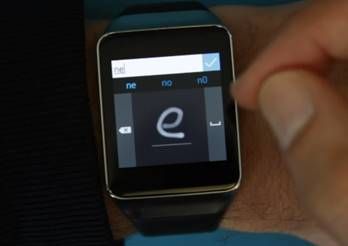 It’s called the Analog Keyboard for Android Wear, and it’s available for download from Microsoft Research. Note that the initial version of the app only supports smartwatches with 320 x 320 pixel square displays and the Motorola Moto 360. The installation process is also a little complicated and requires the Android SDK and a USB or Bluetooth connection between your PC and watch.

There are other companies working on virtual keyboards for Android Wear, including Fleksy and Minuum. But the Analog Keyboard from Microsoft doesn’t attempt to clutter your screen with a full QWERTY keyboard featuring tiny keys that might be hard to hit with a finger. Instead you enter one letter at a time as if you were writing on paper (or an old-school Palm Pilot).

Microsoft is referring to the Analog Keyboard as a prototype… and for good reason. For instance, it currently only supports lower-case characters, not upper-case letters and doesn’t run on watches with 280 x 280 pixel screens. Microsoft says the keyboard can also be a battery hog, since all processing is done on your watch, not on your phone or in the cloud.

But the app does support auto-correct for frequently used words, allowing you to keep writing even as you make the occasional typo… or whatever you call an incorrectly drawn letter.