Like Lenovo’s ThinkPad Yoga convertible notebook, but wish it had a larger screen?

The company didn’t give this model any screen time during its Yoga event in London today, but that was an event aimed at consumer products, while the ThinkPad Yoga 14 is a notebook that means busienss. 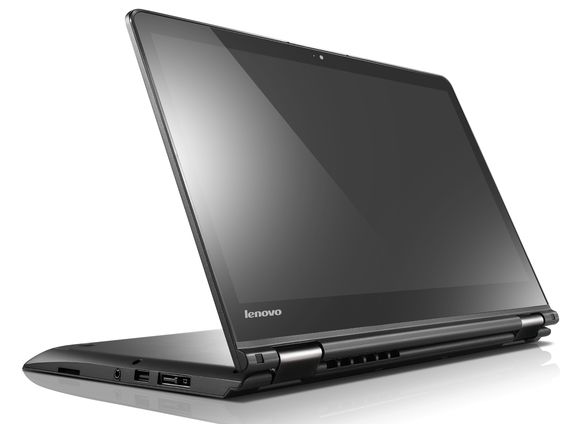 The new model has a larger screen than the 12.5 inch ThinkPad Yoga introduced last year, but Lenovo uses the extra space in this larger laptop for features such as optional NVIDIA GeForce 840M graphics.

The ThinkPad Yoga 14 features an Intel Core i5 Haswell processor, 8GB of RAM, a 1TB hard drive with 16GB of solid state cache, and a docking connector as well as ports including an SD card reader, 2 USB 3.0 ports, a USB 2.0 port, and HDMI output.

Lenovo’s new ThinkPad Yoga 14 is a bit on the chunky side when compared with the new 0.5 inch, 2.6 pound Yoga 3 Pro. The 14 inch model measures 0.7 inches thick and weighs about 4.1 pounds. If you opt for NVIDIA graphics, the computer will be a bit heavier.

Then again, the ThinkPad Yoga 14 has a sturdy magnesium alloy case and a keyboard that actually retracts when you flip the screen back 360 degrees to use the computer in tablet mode. That way you won’t brush the keys with your fingertips while holding the tablet.

Lenovo’s new 14 inch ThinkPad Yoga should be available soon for $1200 and up.

via Techlicious and PC World