Last year Lenovo launched the Yoga line of Android tablets. These tablets offer long battery life and an unusual design where one side of the tablet is thicker and heavier than the other to give you something to grip while holding a Yoga tablet one-handed. There’s also a small kickstand built in, which lets you prop up the tablet when you’re not holding it.

Lenovo is holding an event on October 9th to unveil it’s next-generation Yoga tablets… but we already have a good idea what they’ll be announcing.

Update: More details about the processors, batteries, and other specs have emerged.

This summer a new tablet called the Lenovo Yoga 2 showed up at the FCC website, and now Lenovo has prematurely posted some details about the Yoga 2 lineup on its own website.

Like last year’s models, the new Android tablets will come with 8 or 10 inch displays… but there’s also a new 13 inch model called the Yoga Tablet 2 Pro.

Not a fan of Android? No problem. Lenovo is also going to introduce Yoga 2 tablets with Windows software. These will also come with 8, 10, and 13 inch displays.

Italian site HDBlog has obtained some pictures of the new tablets. They look a lot like last year’s models, except the cases are black instead of silver and there’s a Windows logo below the screen on Windows models. Like the original Yoga tablets, the new models feature kickstands, front-facing speakers, front and back cameras, HDMI, microUSB and headphone ports, and a thick side for a big battery. 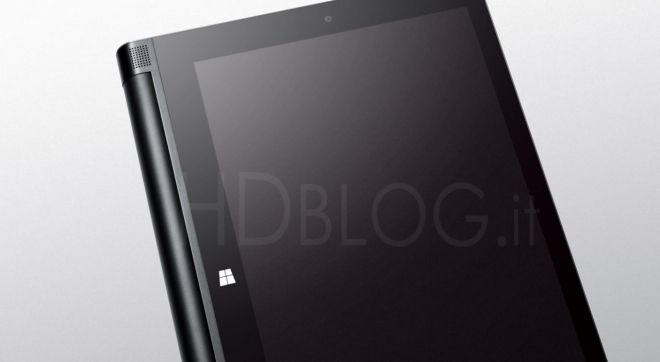 We’ll have to wait for Lenovo to actually announce the devices before we know what kind of processors, battery life, or other specs they’ll have. But I’d be kind of surprised if the Windows models had anything other than Intel Bay Trail processors.

Lenovo also offers a line of convertible ultrabooks under the Yoga name. These are essentially laptops with hinges that let you fold the display so that it’s back to back with the keyboard. They tend to be more expensive (and heavier, but also more powerful) than the tablet-only models that don’t have built-in keyboards.