A handful of smartwatches including will.i.am’s Puls and the Samsung Gear S let you make and receive phone calls without a separate phone. And some smartwatches include a built-in mic and speaker, letting you use them as speakerphones for your smartphone.

But the .klatz is one of the first watches I’ve seen that can act as a Bluetooth handset for your existing phone.

You wear it around your wrist like a watch or bracelet. But when a phone call comes in, just take the .klatz off your wrist and hold it to your head and you’ve got a (somewhat awkwardly shaped) cellphone.

The developers of the .klatz are hoping to raise $140 thousand on crowdfunding site Indiegogo to bring the device to market by March, 2015. 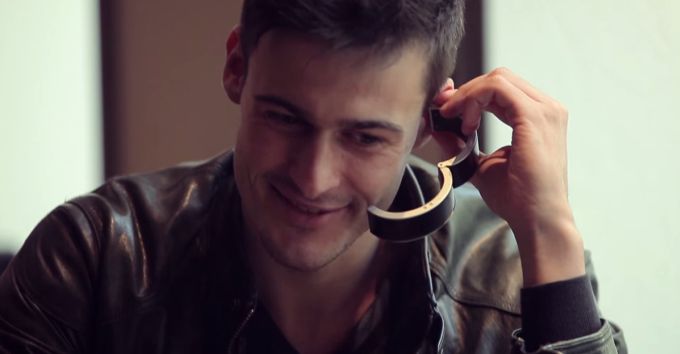 Eventually the goal is to sell the wearable for $149. Early backers of the crowdfunding campaign can try to reserve one for as little as $99 — but keep in mind that there’s no guarantee the project will be fully funded or that the developers will be able to deliver on their promise even if it does.

It’s usually best to think of backing a crowdfunding campaign the same way I think about pledging to a public radio station. You’re giving money to help support the makers of the product, not to get a coffee mug or tote bag. That’s just a bonus, and in this case it’s a bonus that you may or may not ever actually receive.

Anyway, with that cautionary note out of the way, the .klatz is at least an interesting concept. It should get up to a week of battery life thanks to the large battery that can be tucked away in the solid-colored wristband and the 384 low-power LED lights that function as its 32 x 12 dot display.

The device features Bluetooth 4.0 for pairing with an Android or iOS phone. Support for Windows Phone is also in the works, and you can use the .klatz as a Bluetooth headset for any phone that supports Bluetooth 2.1 or higher.

When paired with Android or iOS you can accept or reject calls, view text notifications, and control music playback using the .klatz. But it’s the ability to actually take calls on the watch/handset that makes it stand out.

2 replies on “.klatz smartwatch works as a handset when it’s off your wrist (crowdfunding)”