As expected, HTC has introduced a new smartphone featuring 13MP wide-angle cameras on both the front and back. It’s called the HTC Desire Eye, and not only does it have a high-quality front-facing camera, it also includes a new suite of apps designed for snapping selfies.

The HTC Eye Experience software will also roll out to HTC One smartphones in the coming month. 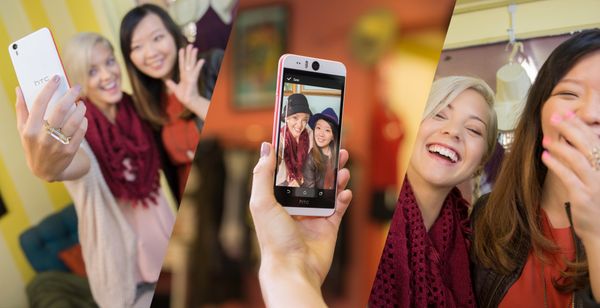 HTC’s new phone has dual-color LED flashes on both the front and rear cameras, a 5.2 inch, 1920 x 1080 pixel display, and an IPX7 waterproof design which allows it to withstand a dip in up to 1 meter of water for up to 30 minutes.

Other features include a Qualcomm Snapdragon 801 processor, 2GB of RAM, HTC Boomsound stereo front-facing speakers, and a 2400mAh battery.

The HTC Eye Experience software includes new features including an Autoselfie mode that lets you snap a picture by holding the phone steady for a few seconds. You can also use voice commands to snap a picture or record a video.

You can also edit your selfie into the image from the rear camera to put yourself into the action, or use a new tool that takes two people’s faces and blends them into one. It won’t really show you what your kids would look like, but it’s kind of a neat party trick to have built into a smartphone’s camera software.

HTC is also bringing its Zoe photo and video sharing app out of beta, and making it available for both Android and iOS.