A new fitness tracker from Fitbit showed up at the FCC today, giving us a good idea that the product would be called the Fitbit Charge. Now the folks at Gizmodo have obtained some promotional materials for the new device… and it turns out there are actually two different models.

The Fitbit Charge appears to be company’s follow-up to last year’s Fitbit Force. Meanwhile the Fitbit Charge HR has all the same features… plus the ability to constantly monitor your heart rate. 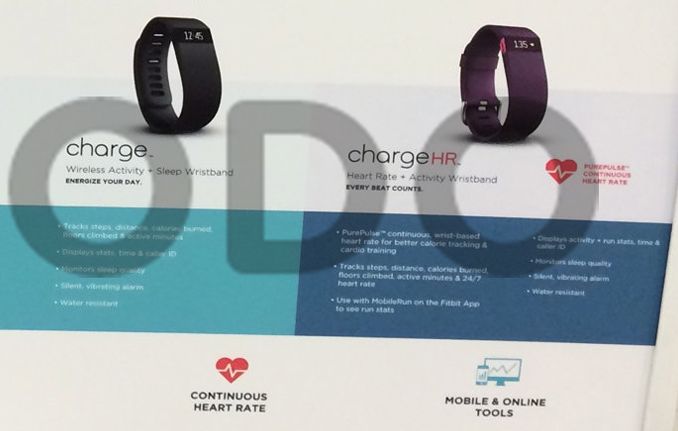 Both models are designed to be worn around your wrist like a bracelet, and both can track steps, distance traveled, floors climbed, and the number of minutes you’re active. They can also estimate the number of calories you’re burning throughout the day and monitor your sleep quality.

There’s a built-in display that can show your stats. It can also display the time, or caller ID information when paired with your smartphone. There’s a vibration motor for alarms. The Fitbit Charge and Fitbit Charge HR are both water resistant.

Fitbit hasn’t announce the price or release date for either device yet. In fact the company hasn’t officially said anything about them. But the Fitbit Charge seems awfully similar to last year’s Fitbit Force, so I wouldn’t expect it to cost much more than the $130 that Fitbit was asking for that model before it pulled it from the market in response to reports that it was irritating some people’s skin.

The model Fibit Charge HR might cost a bit more due to its heart-rate monitor. But it seems to be one of the few fitness trackers of its type designed to offer continuous heart rate monitoring without a separate chest strap.