Fitbit is one of the leading names in the wearable fitness tracker space… even though the company’s Fitbit Force has been offer the market for months due to a recall after users complained of skin rashes.

Now the company’s launching a new line of devices including updated activity trackers and its first watch. Hopefully none of them will irritate your wrist.

As expected, new models include a new activity tracker with a heart rate sensor and a watch which includes GPS, a bigger display, and support for smartphone notifications, among other things.

The entry-level trackers are basically this year’s version of the Fitbit Force. You can wear these devices like a bracelet and they’ll track your steps, distance, sleep quality, and other vital stats.

There’s a small OLED display that displays information at a glance, and you can pair the Charge with a smartphone over a Bluetooth connection not only to sync your data with a mobile app, but also to display caller ID information when a call is coming in.

Fitbit promises up to 7 days of battery life fro the Charge and says the device is water resistant up to 1 ATM.

The Charge HR includes a heart rate sensor that can monitor your pulse constantly… but that features takes a slight toll on battery life. This model only gets up to 5 days of run time between charges.

Both models feature a strap made of a new “elastomer” material which presumably won’t give you a rash.

Fitbit is now selling the Charge for $130 and taking pre-orders for the Charge HR for $150 at the Fitbit Store.

The company’s first watch can do everything the Fitbit Charge HR can… but it also has built-in GPS for tracking your route during a run, a bigger screen, and the ability to control music playback on your phone. 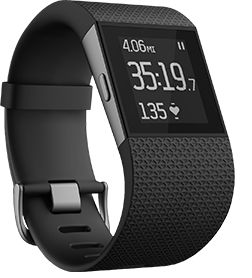 The Fitbit Surge has a touchscreen, a digital compass, ambient light sensor, vibration motoro, and 3-axis accelerometer and gyroscope.

It’s water resistance up to 5 ATM and offers up to 5 days of battery life.

Fitbit is taking pre-orders for the Surge watch for $250. Sure, you could buy a Sony Smartwatch 3 with GPS and Android Wear for the same price. But you wouldn’t get the heart rate sensor, 5 days of run time, and integration with the Fitbit ecosystem.