Audiovox is launching a new Android tablet with dated specs and a kind of high price tag. But that’s not what makes the Audiovox T852SBK unusual: it’s the fact that this tablet is designed to be used either as a standalone device or as an in-vehicle entertainment system. 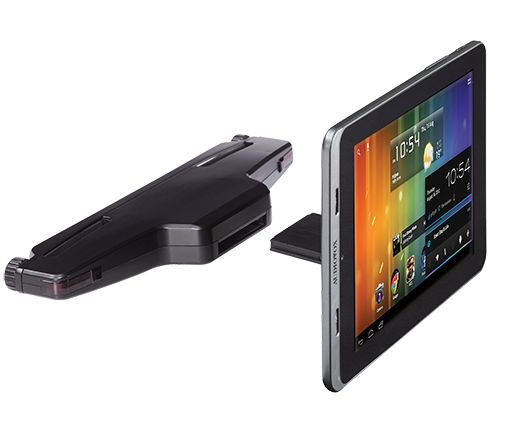 The tablet features an 8 inch display, 1GB of RAM, 8GB of storage, a microSD card slot, and a 1.5 GHz dual-core processor. It has stereo front-facing speakers, a 2MP rear camera, and a 0.3MP front camera. It supports 5-point multitouch input and HDMI output.

The Audiovox tablet is a Google Play certified devices with access to the Play Store… but at a time when Android 5.0 is starting to roll out, this tablet ships with Android 4.1. Hello 2012.

What’s special about this tablet is the retractable “support arm” in the back. You can use it as a kickstand or slot the arm into a bracket that can be secured to a headrest so your kids can use the tablet to watch videos during long rides in the car.

There’s also a built-in 100 channel FM transmitter which you can use to beam audio to your car stereo, and an IR transmitter that lets you use a pair of infrared wireless headphones that come with the tablet.