An Asus Padfone is a smartphone that fits into a tablet-sized dock when you want to use a larger screen and a bigger battery. Asus has been selling Padfones in Taiwan for a few years, and this summer AT&T became the first wireless carrier to offer a model in the United States when it launched the 5 inch Padfone X with a 9 inch tablet docking station.

Now the company has something a bit smaller. The Padfone X mini is a 4.5 inch smartphone that comes with a 7 inch tablet station.

AT&T will begin selling the Padfone X mini October 24th for $200. That’s the price for a contract-free phone and tablet that you can use with AT&T’s GoPhone pre-paid mobile service. 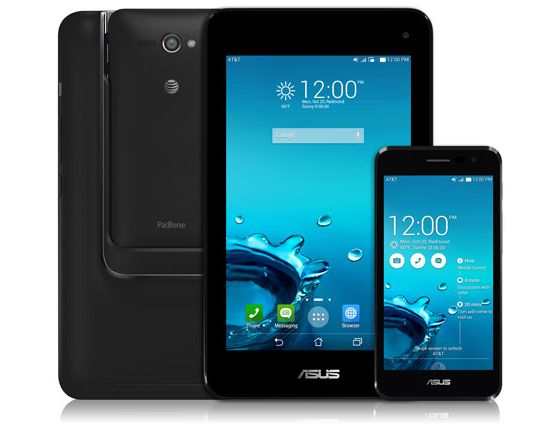 The phone itself has a 2060mAh battery which AT&T says should provide up to 15.8 hours of battery life. There’s a 2200mAh battery in the tablet station. Use the phone and the tablet together and you should get up to 28.3 hours of run time.

The tablet station doesn’t work as a standalone tablet: it has a touchscreen display and a battery, but it relies on the phone’s processor, memory, storage, and software for everything else.

If you’re wondering why you’d want a phone that comes with a tablet dock rather than a separate phone and tablet, here are a few reasons the idea makes sense:

In the case of the Padfone X mini you’re not exactly getting the best phone or tablet experience that money can buy. The device is powered by a relatively old processor and the screen resolutions aren’t all that exciting. But when I got a chance to check out a similar Padfone mini device at CES in January, I was impressed with the size, versatility, and even the responsiveness of the phone/tablet hybrid.