The Asus Transformer Book T200 is a Windows tablet with an 11.6 inch display, an Intel Atom Bay Trail processor, and a detachable keyboard dock that lets you use the computer as a notebook. It’s a follow-up to last year’s popular 10 inch Transformer Book T100, but the new model has bigger screen, a faster processor, and some models also feature more memory.

Asus introduced the Transformer Book T200 in June, and now it’s available for purchased in the US for $400 and up. 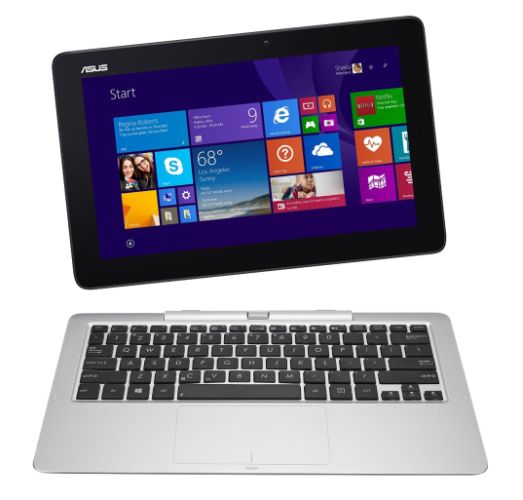 Other stores including Amazon, B&H, Newegg, and TigerDirect sell a $500 model that has a faster Atom Z3795 quad-core CPU, 4GB of RAM, 64GB of storage, and Windows 8.1 64-bit. While this model packs more power (and a higher price tag), it doesn’t appear to come with Office preloaded.

Both models feature 1366 x 768 pixel touchscreen displays and up to 8.5 hours of battery life. And both models weigh about 3 and a half pounds (when you use the keyboard and tablet together). The tabelt features microSD, micro USB, and micro HDMI ports, while the keyboard has a USB 3.0 port and a USB 2.0 port as well as an Ethernet jack.

While Asus doesn’t currently sell a model (in the US) with a hard drive built into the laptop dock, there’s an empty drive bay under the keyboard, allowing you to add up to 1TB of extra storage yourself. In some other markets you may be able to find the Transformer Book T200 with a hard drive pre-installed in the keyboard dock.