The Acer Chromebox CXI is a tiny desktop PC with an Intel Celeron 2957U Haswell processor and a starting price of $180.

I got a chance to see one in person recently, and while I didn’t have to the opportunity to actually turn it on and use the Chromebox, this is what it looks like. 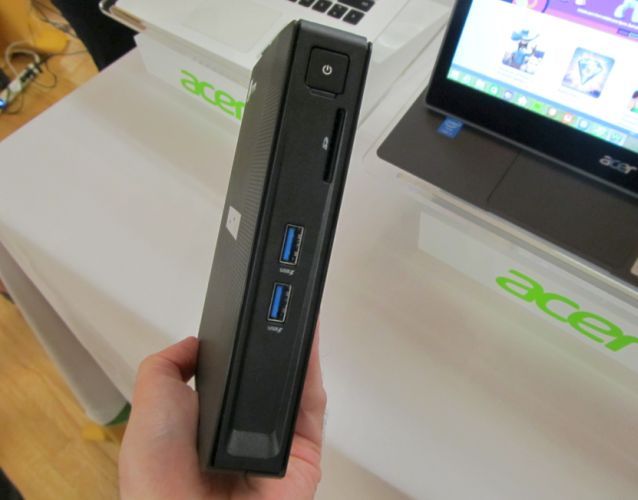 The Acer Chromebox CXI is small enough to hold in one hand and it basically has the guts of a Chromebook in a tiny desktop package. It’s powered by Intel’s 15 watt, 1.4 GHz dual-core processor and features 2GB to 4GB of RAM and 16GB of solid state storage.

Acer has a suggested retail price of $180 for a model with 2GB of storage and $220 for a 4GB model. The only store I can find offering the Chromebox at those prices is PC Connection, which stocks both the $220 and $180 models.

TigerDirect, PC Mall, Newegg, and Rakuten also sell the Acer Chromebox CXI, but as of October 4th, 2014 all of those stores are charging higher prices for the little desktop.

You can also pick up an Asus or HP Chromebox for less money — Amazon sells them for around $160 or less. But those models have Celeron 2955U chips. That means they don’t support Intel WiDi (Wireless Display) or QuickSync.