Toshiba is expanding its Radius line of convertible laptops… but shrinking the size of its latest model. The company’s first Toshiba Satellite Radius launched this summer as a 15.6 inch notebook which became a tablet when you pushed the screen back 360 degrees until it was resting opposite the keyboard.

The latest model is the Toshiba Satellite Radius 11, which features a smaller 11.6 inch display. 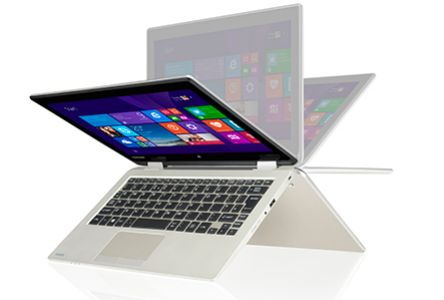 At 2.9 pounds, the new model is also a lot lighter than its nearly 5 pound predecessor. US pricing hasn’t yet been announced, but The Verge reports it’ll sell for £329 in the UK, which suggests it’ll also be a lot cheaper than the 15 inch model, which sells for around $900.

Update: Toshiba says the Satellite Radius 11 should be available in the United States in late October or early November, but the company isn’t ready to announce the price yet.