Sony wants in on the head-mounted wearable space pioneered by Google Glass. The company has just unveiled a SmartEyeglass software developer kit preview.

At this point developers can work with a device emulator to create and test apps, but the idea is to eventually produce a piece of smart eyewear that will let users interact with apps within their normal field of vision. 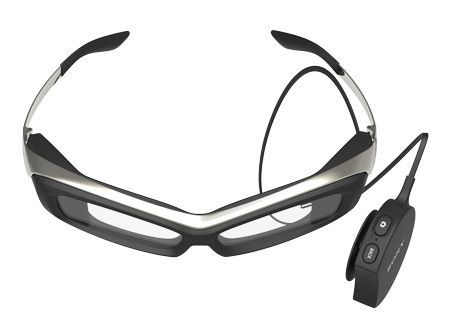 Sony’s SmartEyeglass features transparent lenses that are 85 percent see-through, but which can display graphics directly on the glass.

While the glasses have thick frames that make Google Glass look svelte, the advantage to Sony’s system is that there’s no screen floating in front of your glasses — the screens are the glasses. This means there’s nothing blocking your vision… and images and text aren’t limited to a small square above your eye. They can take over your entire field of view.

SmartEyeglass has a display resolution of 419 x 138 pixels, has a binocular layout, and offers 8-bit color depth on a monochrome green display.

The eyewear also features a 3MP camera which can shoot video at VGA resolution, an accelerometer, gyroscope, compass, brightness sensor, and microphones, 802.11n WiFi, Bluetooth 3.0, and the ability to pair with a phone or tablet running Android 4.1 or later.

There’s also a wired controller with a battery, speaker, buttons, and a touch sensor.

But that’s all in the future… the developer preview Sony is launching now lets app developers use a smartphone’s display, touchscreen, and camera to imitate the expected behavior of the finished product.