Polaroid’s new Socialmatic Camera gets back to the company’s roots by letting you print photos on the fly. But it does it with a modern twist. The camera has a built-in zero ink printer that can shoot out a 2″ x 3″ photo in less than a minute.

But that’s not the camera’s only trick. It also runs Google Android, features WiFi and Bluetooth, and allows you to upload photos to Facebook, Twitter, Instagram, or other places.

Oh yeah, the camera also basically looks like an Instragram logo (which looks like a classic Polaroid camera, so there’s that…) 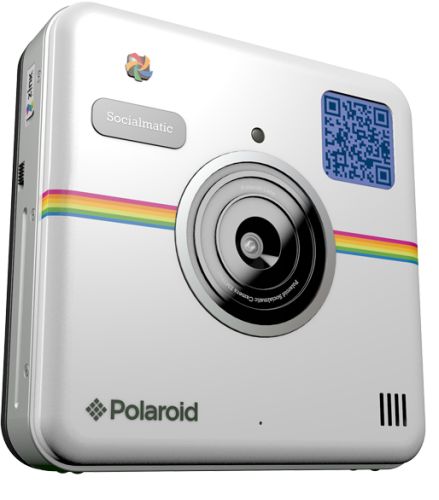 The camera’s a 5.2 inch square with a 4.5 inch touchscreen on the back. You can use it to control the Android-based software which includes a camera app as well as support for third-party apps.

In addition to letting you share photos on social media, the Socialmatic earns its name from a feature that gives every camera and every photo you snap with it a QR code. Scan the code and you can track the photo’s history and see where it’s been posted. You can also send photos from one camera to another to share or print them.

There’s a 14 megapixel camera on the front of the device and a 2MP selfie came facing the touchscreen. There’s also a small LED above for displaying QR codes. It can also show a smiley face for some reason, as well as a sad face when you haven’t taken photos in a while, a print logo when the printer is in action, and a few other icons such as an envelope when there’s a new message to read.

Polaroid’s Socialmatic camera has an LED flash, 4GB of built-in storage, and a microSD card slot for removable storage.

As for physical photos, you can load about 10 sheets of photo paper in the camera at a time.

The camera is expected to launch in early 2015. Engadget reports it’ll sell for €300 in Europe. US pricing hasn’t yet been announced.