Nixie is a project that aims to combine two of the latest trends in mobile tech: selfies and wearables. No, it’s not another selfie hat. It’s a drone that you wear on your wrist like a bracelet until it’s time to let it fly. 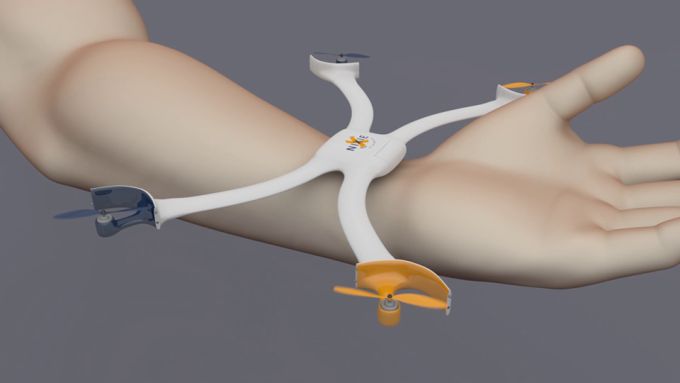 Here’s the idea: The Nixie is a quadcopter with a built-in camera. But the body isn’t rigid. Instead you can fold it around your wrist and wear it while you’re hiking, biking, or doing other things where you might not want to have to reach in your bag to pull out an aerial drone and a remote control.

When you want to shoot some video just lift your arm and with a gesture the Nixie will unfold and fly away… but not too far. It’ll fly around you, automatically detect where you are, and keep you in the picture while capturing the action. When it’s done it’ll fly back to you so you can catch the camera and put it back on your wrist.

That’s the idea anyway. Nixie is still under development and the promotional videos combine a lot of concept imagery with a few photos of an actual prototype.

The developers of the Nixie are participating in Intel’s MakeIt Wearable design contest where they’ve made it to the finalist stage. The device is powered by Intel’s low-power Edison platform and as finalist in Intel’s program they’ll get $50,000 and help with the effort to move Nixie from prototype to product.

via Slashdot and Hot Hardware

3 replies on “Nixie is a wearable drone (prototype)”