MSI has released a portable gaming laptop that measures 0.8 inches thick, weighs less than 2.9 pounds, and has a 13.3 inch, 2560 x 1440 pixel display. But while the MSI GS30 Shadow laptop has a powerful Intel Core i7 Haswell processor and Intel Iris Pro graphics, it lacks something you find in most laptops aimed at gamers: a discrete graphics card from AMD or NVIDIA.

But there’s a reason MSI is positioning the GS30 Shadow as a gaming PC. It’s designed to connect to a GamingDock that lets you use just about any PC graphics card you’d like. 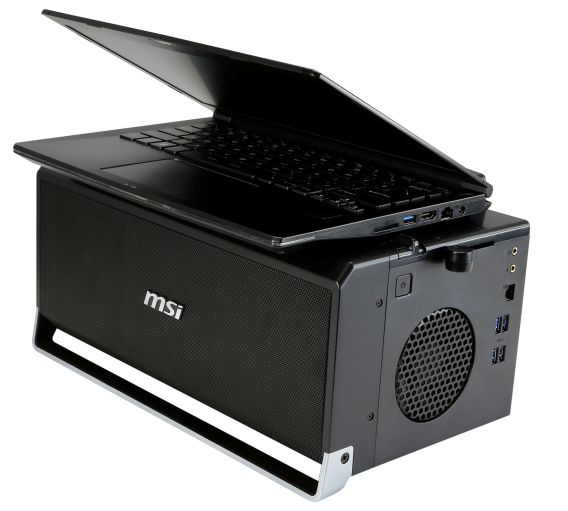 The GamingDock features a PCI-e x16 slot for a graphics card, DVI and HDMI outputs, and audio jacks.

The dock alone is also bigger than some desktop computers… but the idea is that you’d leave the dock at home where it’s connected to an external display or two, allowing you to pick up the laptop and take it with you.

Intel’s Iris Pro graphics should be good enough to play many games at lower graphics settings even when you’re on the go. Or you could just treat the machine as a thin, light, and reasonably powerful laptop for non-gaming tasks (although if you were going to do that you might as well just buy a gaming desktop and a laptop separately).

Since the graphics card is in the GamingDock you can select the card you want and upgrade it as often as you’d like without replacing your entire laptop.

The MSI GS30 Shadow laptop supports up to 16GB of RAM, features support for up to 2 M.2 solid state drives, has a backlit keyboard, 802.11ac WiFi, Bluetooth 4.0, Ethernet, HDMI output, an SDXC card reader, and a 730p webcam.