Now that Motorola’s first smartwatch is shipping, the folks at iFixit opened up a Moto 360 up to see what makes it tick… or not tick, since this is an electronic gadget and not a mechanical watch.

There aren’t many surprises under the hood… but there are a few. 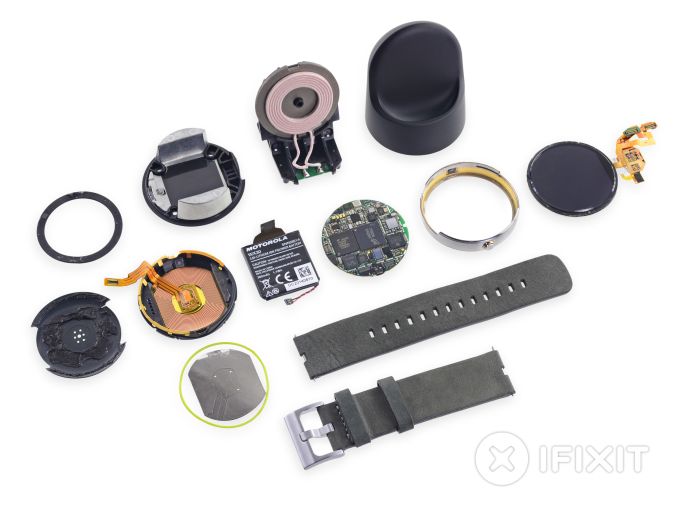 For instance, Motorola says the watch has a 320mAh battery, but the unit iFixit tore down has a smaller 300mAh battery.

Update: Motorola explains that 300mAh is the minimum capacity of the battery while 320mAh is the maximum. Device makers often give a range like this, and while Motorola is using 320mAh as the official spec, there’s not a lot of room on the battery, where Motorola decided to use the smaller number.

Since iFixit is also an online repository of tools and information for repairing gadgets, they also tell you a few things that Motorola won’t — like the fact that there’s a lot of adhesive and rubber seals holding the watch together. That means it’s kind of tricky to open up and not particularly easy to repair. If you need to fix a broken Moto 360, you’d better hope the $250 watch is still covered under warranty.

The good news is that the watch is IP67 water resistant, which means it should be able to stay under up to a meter of water for up to 30 minutes… and wearing it while washing dishes or taking a shower shouldn’t void your warranty.

The Moto 360 is the first Android Wear smartwatch to feature Qi wireless charging, which means there’s no micro USB port. But it supports Bluetooth debugging which may help developers create apps for the watch (and which may help hackers root the device or create custom ROMs).