Competition among US wireless carriers seems to be heating up, with companies trying new ways to attract customers. T-Mobile just unveiled a new type of WiFi calling which the company says basically puts a cellular tower in your house.

Sprint, meanwhile, has just launched a new “iPhone for Life” program that lets customers get a new iPhone 6 or 6 Plus for no money down and upgrade to a new iPhone every 2 years.

AT&T’s pre-paid subsidiary Cricket, on the other hand, has announced that it’s doubling the amount of high-speed customers get no matter how much they pay each month.

To get those prices you’ll have to sign up for Cricket’s auto-pay service. Otherwise prices are $5 higher.

Those data caps apply to Cricket’s 4G LTE network. If you go over the limit you can still access the internet, but you’ll be throttled to slower speeds. 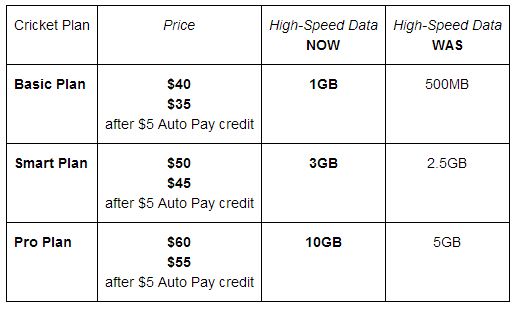 As for Sprint’s iPhone for Life plan, the company isn’t exactly giving away iPhones.

You’ll need to pay $20 per month on top of your regular phone bill for an iPhone — but an unlimited data plan for iPhone users runs $50 per month, which is about $10 less than the company’s usual plan.

So this could be a good deal for some customers who don’t have $200 or more to pay up front for an iPhone, or who expect to upgrade every two years anyway. You’re essentially paying $480 for a phone over the course of a 2-year contract, which is less than the price of an unlocked iPhone 6 — and you’re kind of saving $240 during that same period thanks to Sprint’s low plan . 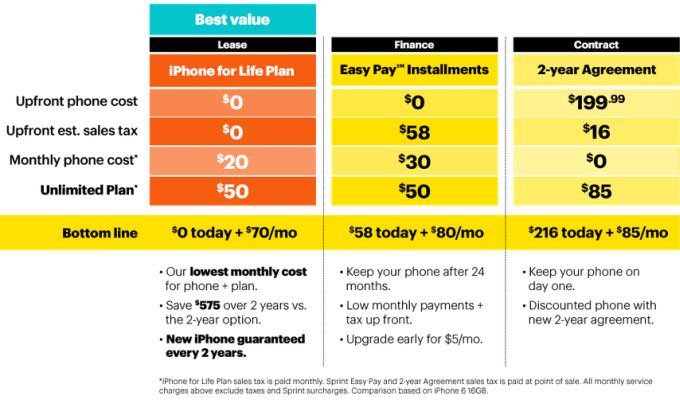 In other words, by the end of 24 months you’d end up paying $1680 with the iPhone for Life program in which you’re leasing a phone, or $2256 if you buy a phone and sign up for a 2-year contract.