All-in-one desktop computers are convenient since they take up less space than a tower PC and separate display and have fewer wires cluttering up your desk. But it tends to be tougher to upgrade or replace hardware on an all-in-one system.

Lenovo is introducing a new approach to the all-in-one space with something it calls the ThinkCentre Tiny-in-One. 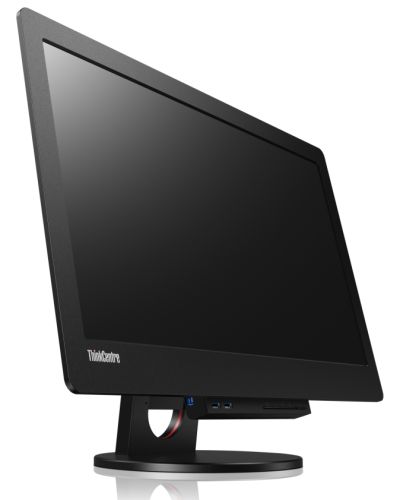 The Tiny-in-One is basically a new 23 inch desktop monitor with a docking station in the back for one of Lenovos’s ThinkCentre “Tiny” PCs such as the M73 or M93P.

Need a new screen? Just pop out the computer and and slide it into a different display dock.

Want to replace the CPU, RAM, storage, or other hardware? Just pop out the tiny PC and either apply the upgrades or replace the whole PC with another compatible model.

The system has a 23 inch, 1920 x 1080 pixel display and a stand that lets you adjust the angle of the screen. But the TIO isn’t just a display. It also has stereo speakers, four USB 3.0 ports including two on the front, and includes room for an optional optical disc drive.

The Tiny-in-One is aimed at the enterprise market where it’s designed to make it easier for IT managers to deploy, upgrade, and replace computers. It’ll be available in October for $279 and up.