Intel’s 5th-gen Core “Broadwell” chips are just starting to arrive, and we won’t see most of the new chips from this family until early 2015. But Intel says it’s already working on its 6th-gen Core chips and that members of the “Skylake” family should launch in the second half of 2015.

At the Intel Developer Forum in San Francisco, Intel showed off a few prototypes of computers powered by the upcoming chips. 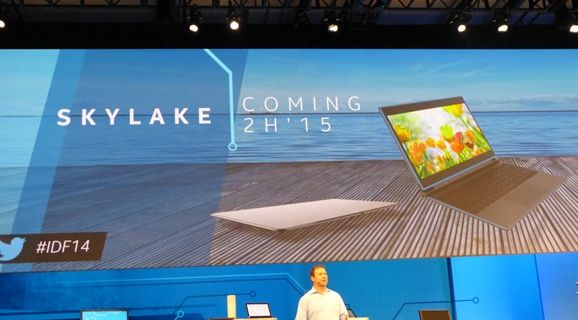 One model was a desktop PC handling 4K video playback, while the other was a 2-in-1 notebook.

Intel isn’t ready to say much about the Skylake processors, but we know that Skylake will be a “tock” in Intel’s Tick-Tock schedule. That means they’ll feature a new architecture designed to boost performance while reducing power consumption, but they’ll be based on the same 14nm process technology as Broadwell chips.

Still, it means that in the second half of 2015 we should see Intel-powered computers with better battery life and performance than the systems that’ll ship in late 2014 and early 2015.

As usual, the longer you can wait to buy a new machine, the better your options will look when you do decide to pull the trigger. I think Intel would rather just have you buy a new system every 6-12 months though.