The first PCs featuring 5th-generation Intel Core processors are on the way… and they’ll be thin, light, and many will be fanless.

Intel’s first chips based on its new “Broadwell” architecture are low-power Core M processors that use just 4.5W of power. Higher performance chips for premium laptops, desktops, and other devices are due out in 2015. But even the low-power Intel Core M chips will have the graphics chops to handle HD video playback, high-resolution displays, multitasking, and general PC duties. 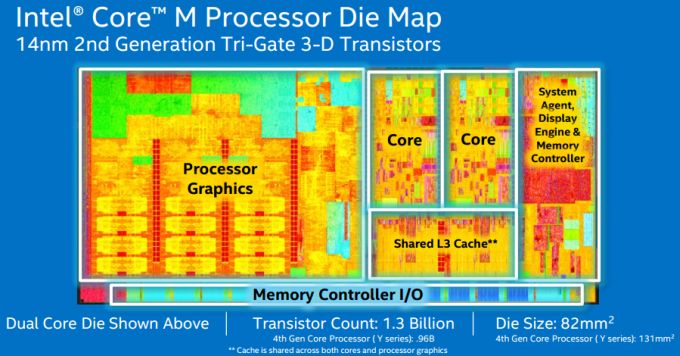 According to Intel the new chips offer up to 50 percent faster CPU performance and 40 percent graphics than a 4th gen Intel Core “Haswell” CPU on a performance-per-watt basis. More importantly, Intel says its new 4.5 chips are about twice as fast as an 18W Core i5 chip from 2010 and offer up to 7 times the graphics performance.

That’s significant because a lot of people don’t upgrade their PCs very often… so Intel is hoping that it can convince some of the folks who’ve been holding onto their aging laptops that the time is right to upgrade. 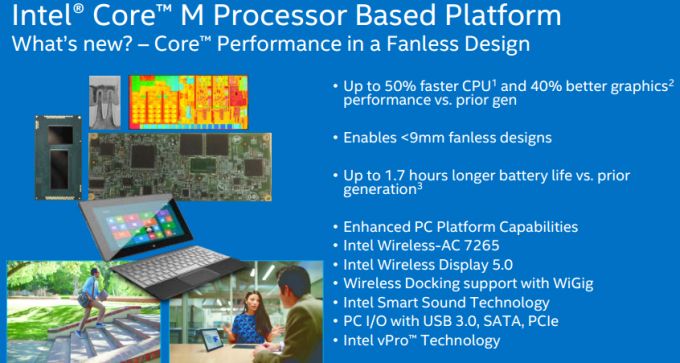 Intel says PC makers will offer notebooks and slate PCs with its new Core M processors. But for the most part the first Broadwell chip is aimed at 2-in-1 tablet/notebook hybrids with detachable or convertible form factors.

In other words, folks who do decide to trade in their 4-year-old laptop for a new device will find things have changed a bit. Arguably that’s been true for a while: it’s not like convertibles or thin-and-light devices are brand new. But the Core M processor uses as little power as a cheaper Intel Atom chip while offering Core-level performance.

That means in addition to improved performance, you should see improved battery life. Intel says a device with a 35Whr battery and an Intel Core M processor should get about 1.7 hours more battery life than an equivalent system featuring an Intel Haswell chip.

Another benefit of the low-power processor is that it doesn’t generate much heat. This allows device makers to offer fanless systems. Take out the fan and not only does your laptop or tablet run more quietly, but it can be thinner.

Intel says the Core M chip paves the way for tablets that are less than 0.35 inches thick, which would mean that Windows tablets with Broadwell chips could be as thin as an iPad (but a bit thicker than an iPad Air).

The chip maker figures its lower-cost, lower-performance Bay Trail chips will probably continue to power entry-level tablets with 8 inch and smaller screens, while Core M processors will be used in devices with 9 inch and larger displays.

Intel will offer 3 different versions of the Core M processor at launch:

Each model will feature Intel HD 5300 graphics with a base clock speed of 100 MHz. The Core M-5Y70 will support maximum graphics speeds of up to 850 MHz while the other chips top out at 800 MHz. All three chips support 1600 MHz LPDDR3L memory.

Intel HD 5300 graphics supports DirectX 11.2, OpenGL 4.2, OpenCL 2.0, and video playback at up at resolutions up to 3840 x 2160 at 24 Hz. The chip maker says that doesn’t mean we’ll see tablets or notebooks with 4K displays and Core M chips… but the processor can support external displays with Ultra HD screens.

Other features include support for the latest versions of Intel WiDi wireless display and Quick Sync video.

According to Intel, we can expect to see Core M-powered consumer and business PCs from about 5 different device makers by the end of the year, with the first coming in October. All told, there are about 20 different PC designs based on Core M chips in the pipeline. Some will launch in 2014 while others will come in early 2015.