Google has released developer guidelines for apps that will run on the company’s upcoming in-care software. Android Auto is expected to launch before the end of the year, letting you interact with Android apps while driving thanks to a touchscreen display that’ll be built into the dashboard of some vehicles.

But Android Auto apps aren’t really standalone apps. Instead they’re smartphone or tablet apps that have an Auto component. When you install the apps on your phone, your in-vehicle system will recognize them and add functionality to your Android Auto dashboard.

That way you can receive notifications, control music playback, or use voice actions in the car. 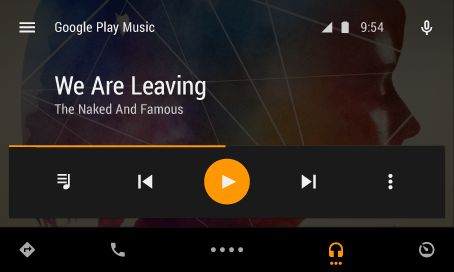 In other words, Android Auto is a lot like Google’s wearable platform. You install Android Wear apps by installing Android apps on your phone as well.

There’s another similarity between Android Wear and Android Auto: Google is maintaining tight control over the user interface. Device makers won’t be allowed to use custom skins. In fact, Android Auto will be even more locked down.

Most apps will look pretty much the same. Developer can choose custom colors and each app will have day and night mode color schemes. But they’ll basically all have the same user interface and button layout.

At launch there will be just a few types of third-party apps that work with Android Auto: apps that can display notifications in a car-appropriate way, and media player apps. Media players will all have a simple bar of playback controls, although some apps might have custom buttons including thumbs up or down or bookmark buttons.

Android app developers have a lot more leeway in designing custom user interfaces for smartphone and tablet apps. But it makes sense for Google to insist on a more unified design language for in-car systems. This helps drivers see information at a glance and know where they need to tap on the screen even when using newly installed apps.

The last thing you want is for drivers to get distracted while staring at a confusing screen in their car when they should be looking at the road ahead.

via /r/Android and Ars Technica