Now that Amazon has launched two new Kindle eReaders, you might be wondering what happens to one of the oldest models the company still sells. Amazon hasn’t updated its 9.7 inch Kindle DX since earlier 2010, and while it doesn’t show up when you search for Kindle devices at Amazon, earlier this year we noticed you could still buy an international model with 3G capabilities for $199.

And you still can… if you’re patient.

Amazon is still taking orders for the Kindle DX, but it has an expected ship date of 3 to 5 months. 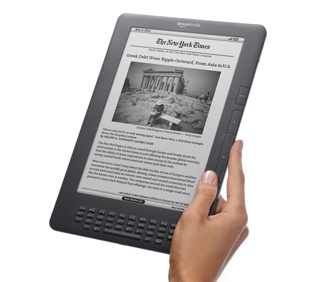 The Amazon Kindle DX has a 9.7 inch, 1200 x 824 pixel grayscale E Ink display. It has 4GB of storage space, stereo speakers, a 3.5mm audio jack, and support for text-to-speech. Unlike most recent models, it also has a keyboard below the screen and page turn buttons on the sides, but no touchscreen.

The eReader measures 10.4″ x 7.2″ x 0.38″ and weighs about 1.2 pounds. That makes it the biggest member of Amazon’s Kindle line of eReaders… but it’s also got the biggest screen, which could still appeal to folks who prefer a big display for large print or for reading eBooks on virtual pages closer in size to a hardcover book than a mass market paperback.

This model supports WiFi and 3G from AT&T in the US as well as some international GSM networks.