Zotac has been selling tiny desktop computers for a few years, but most members of the Zotac ZBOX mini PC family are barebones units that ship without an operating system. Some models don’t even include storage or memory.

Now Zotac is adding Windows 8.1 with Bing to some of its most affordable models, which means you won’t have to install your own operating system to start using some of Zotac’s low-power miniature desktop computers.

Zotac will continue to offer barebones computers for folks who’d rather install Linux or a different version of Windows. But now that Microsoft is offering Windows licenses for cheap (or free) to makers of cheap systems, it’s not that surprising to see companies like Zotac start to offer the option of buying a computer that comes with Windows 8.1 with Bing pre-loaded.

Windows 8.1 with Bing, by the way, is a cheap version of Windows that’s almost exactly like Windows 8.1 standard… it just comes with Bing as the default search engine for Internet Explorer.

Systems that will be available with Windows include:

Each computer comes with Windows 8.1 with Bing 64-bit software and each features multiple USB 3.0 and USB 2.0 ports, Ethernet, and dual display ports (either HDMI and DVI or HDMI and DisplayPort, depending on the model).

Zotac hasn’t announced pricing for the new models yet, but barebones versions of these computers tend to sell for around $130 to $270. 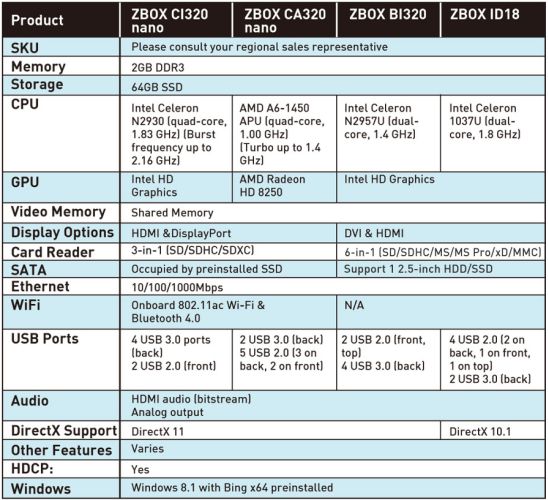