There’s a growing number of smartwatches that you can pair with an iPhone or Android devices to view notifications, control music playback, or perform other actions without touching your phone.

Soon we may start to see smartwatches for Microsoft’s Windows Phone operating system as well.

Microsoft has begun rolling out a preview of Windows Phone 8.1 Update 1 to developers and one of those developers has posted a list of new APIs —  many of which seem to be designed to let you interact with a Windows Phone device using an accessory… like a smartwatch. 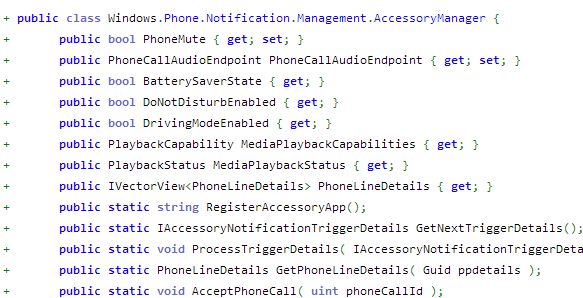 At this point the APIs seem to be aimed at device makers rather than app developers. But eventually we may see smartwatches that can do things like mute, accept, reject, or make phone calls, control media playback, enable driving mode, dismiss or snooze alarms, and more.

Microsoft has long been rumored to be working on its own smartwatch which would work not only with Windows Phone, but also with Android and iOS devices. But if the company’s mobile operating system is getting built-in support for smartwatches we could see third-party watches and other devices take advantage of the features in the future.