Verizon sells a number of tablets for use on its cellular network. Most are Verizon-compatible versions of devices from Apple, Samsung, LG, Asus, and Nokia. But there’s also the 7 inch Verizon Ellipsis Android tablet which was designed specifically for the wireless carrier.

Soon there may be an 8 inch Verizon tablet too. 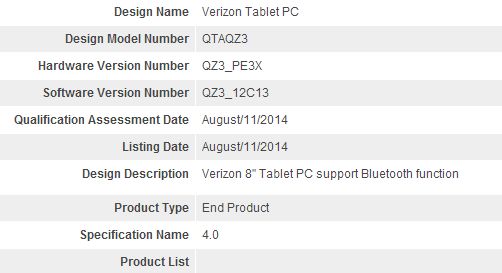 Taiwanese device maker Quanta is developing an 8 inch tablet that’s making the rounds through regulatory agencies. According the product listing at the Blutooth SIG website the device is called a “Verizon Tablet PC” and features Bluetooth 4.0 support.

It’s also got the model number QTAQZ3, which helped me track down a listing at the WiFi Alliance site which confirms that the tablet will have an 8 inch display… and WiFi capabilities.

Since it’ll be sold by Verizon it’s probably save to assume the tablet will also feature 3G and/or 4G capabilities.

Other specs aren’t yet available, so it’s too soon to say whether the tablet will run Windows or Android, have an ARM chip or Intel processor, or be a high-priced device or entry-level tablet. If it’s anything like the Verizon Ellipses 7 though, expect this to be another budget tablet. That model sells for $50 with a 2-year contract.