Toshiba may be getting ready to launch a new 10 inch Android tablet. Last year the company introduced 3 Android tablets with 10 inch screens and starting prices ranging from $250 to $600.

Now a new model with a similar model number has shown up at the WiFi Alliance website suggesting a new 10 inch tablet is on the way. 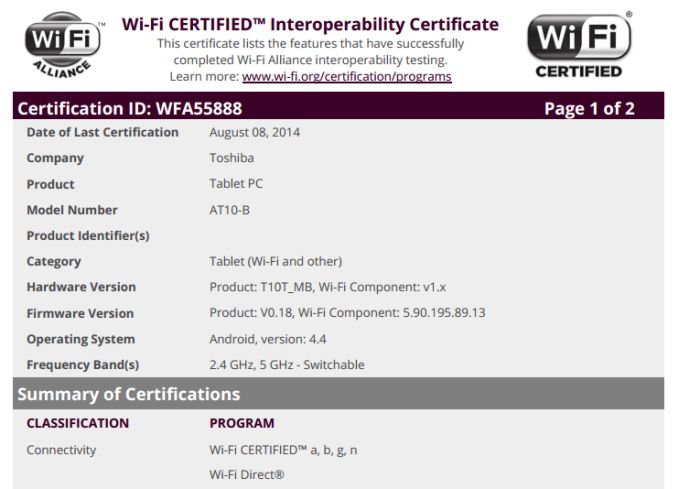 There aren’t many details available, but the WiFi certification documents tell us the tablet will run Android 4.4 and feature dual-band 802.11a/b/g/n WiFi. The Toshiba AT10-B model number suggests that this will be a 10 inch tablet like last year’s models which had the AT10-A name.

What’s not clear is whether Toshiba will try to offer premium products again like last year’s Excite Pro and Excite Write tablets which had Tegra 4 processors, 2560 x 1660 pixel displays, and an optional digital pen.

My guess is that the AT10-B will be a cheaper tablet, more like the Toshiba Excite Go 7 inch tablet which Toshiba added to its lineup this year. You can pick up that model for as little as $100.

There seems to be a downward trend in tablet pricing as Android device makers struggle to compete with Apple’s iPad in the mid-range and high-end tablet space. Aside from the fact that Toshiba has already introduced a dirt cheap Android tablet this year (as well as some inexpensive Windows tablets), the only evidence I have that the new AT10-B will be cheaper than last year’s models is the fact that the Toshiba Excite Pro and Excite Write tablets featured 802.11ac WiFi… something that the new tablet appears to lack.

One reply on “Toshiba’s next-gen 10 inch Android tablet on the way?”