Samsung sells more smartphones than any other company. But Samsung’s Galaxy line of smartphones with plastic cases lack some of the elegance of competing products like Apple’s iPhone.

Now Samsung is trying something a bit different. The new Samsung Galaxy Alpha has a plastic on the front and back, but a metal frame around the sides. It also has decent specs including a 12MP camera and quad or octa-core processor depending region. 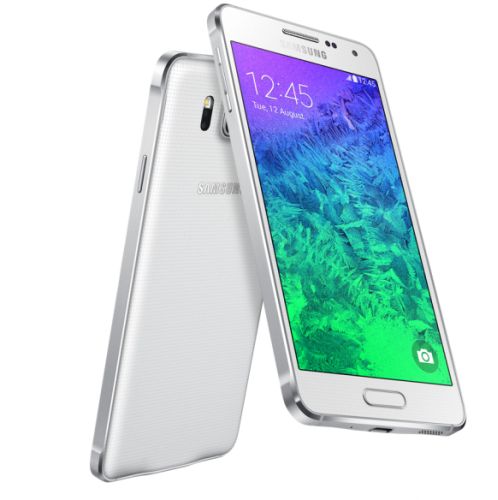 The Samsung Galaxy Alpha features a 4.7 inch, 1280 x 720 pixel Super AMOLED display. The screen’s a bit smaller than the one on the company’s flagship Galaxy S5 and the resolution is lower. But it’s thinner, lighter, and the Galaxy Alpha will likely be a little cheaper than the Galaxy S5.

It features 802.11ac WiFi, 4G LTE support, Android 4.4.4 KitKat software, and either a 2.5 GHz quad-core CPU or octa-core CPU with four 1.8 GHz CPU cores and four 1.3 GHz cores. Samsung hasn’t named the processors, but it’s likely that the octa-core version is an Exynos chip while the quad-core variant could be a Qualcomm Snapdragon processor.

Other features include 2GB of RAM, 32GB of storage, a 2.1MP front-facing camera, and an 1860mAh battery. Like the Galaxy S5, the Galaxy Alpha has a fingerprint scanner.

One thing the new phone doesn’t have? A microSD card slot.

The Samsung Galaxy Alpha should hit the streets in early September.

2 replies on “Samsung goes metal with the Galaxy Alpha smartphone”