Rikomagic introduced its next TV box a few months ago, and now the Rikomagic MK902 II is just about ready to ship.

The little box features a Rockchip RK3288 processor, Android 4.4 KitKat software, and up to 16GB of built-in storage. It has a wholesale price of about $100 per unit and according to Cngadget, the MK902 II should begin shipping in mid-August.

Update: The official Rikomagic store is selling the MK902 II for $132. 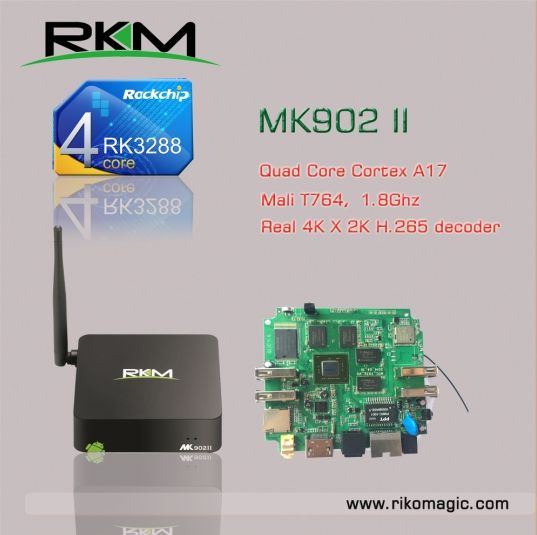 UK-based retailer Cloudsto has been taking pre-orders since the device was first announced. But you can also pre-order from a number of resellers at AliExpress. Note that you’ll probably have to pay $130 or more for the set top box.

The device is one of the first Android boxes to feature Rockchip’s new ARM Cortex-A17 quad-core processor with ARM Mali-T764 graphics.

With Google’s Android TV software set to launch this fall, it’ll be interesting to see whether there continues to be a market for devices like the MK902 II which ship with a slightly modified phone/tablet-version of Android.