Amazon made headlines when the company announced last December that it was working on technology that would allow it to deliver packages by aerial drones. But it turns out Google has been working on a similar project for nearly two years… since long before Amazon Prime Air was announced.

The Atlantic has an in-depth look into Google’s efforts to build a drone delivery system which is code-named Project Wing.

Project Wing isn’t ready for commercial applications yet. But Google has designed a small craft that can take off, fly to a destination, and gently drop off a package before returning to home base. The company’s been testing it in Australia.

We already knew Google had a strong team of robotics experts working on the company’s self-driving car initiative. In hindsight it was probably silly to think that was the only thing they were working on.

Now that Google is revealing Project Wing to the public, the company will join the conversation about drone delivery. It’s not just that companies like Amazon and Google still need to perfect their technology before they can start delivering packages by aerial drops. They also need to convince regulators that the service is safe. 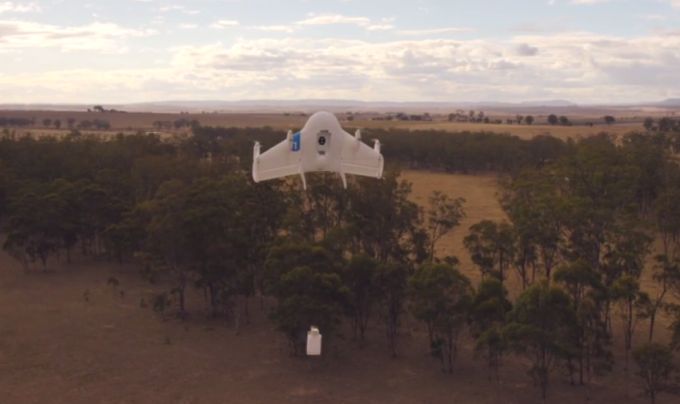 It’s possible that Google’s flying delivery robots could look different by the time they’re ready for commercial deployment… if they ever are. But if Google has its way, overnight shipping might start looking like the slow way to get things you order online. Google envisions a world where your purchases are delivered in minutes.

Once upon a time Google was a search engine company and little more. Now the company makes the most popular smartphone operating system on the planet, operates one of the most popular email services and does much more. But over the last few years the company’s started making some rather big bets on crazy-sounding ideas that could have an even bigger impact on the world of the future: wearable computers, self-driving vehicles, modular smartphones, internet access from balloons, and nearly instant delivery-by-air.