Motorola’s Moto 360 may have been one of the first Android Wear smartwatches announced, but competing devices fro LG and Samsung are already available for purchase, while the Moto 360 is not.

That should change soon.

Motorola is holding an event on September 4th where the company is expected to unveil its latest smartphones and launch the Moto 360. Someone at Best Buy apparently didn’t want to wait until then though. A product page for the watch has already been posted online, complete with pricing information and other details.

Update: Unsurprisingly, the Best Buy page has been removed. 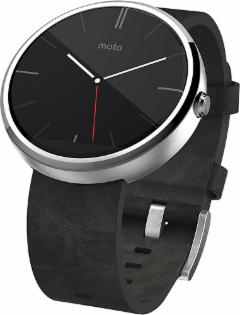 According to Best Buy, the watch has a 1.5 inch, 320 x 290 pixel, backlit LCD touchscreen, Bluetooth 4.0, a pedometer, heart rate monitor, and vibration feature for alarms.

Like other devices using Google’s Android Wear software, it supports voice commands. And the watch has a stainless steel and plastic case, Corning Gorilla Glass over the screen and a waterproof design that let’s you submerge it in up to 3.3 feet of water for up to a half hour.

It has an unspecified Texas Instruments processor, 512MB of RAM, and Best Buy says the watch will be available soon for $249.99… which is pretty much what we had expected.

There’s no mention of wireless charging, but it seems pretty likely the Moto 360 will have that feature as well.