The second version features a 64-bit CPU paired with the same graphics technology. It features NVIDIA’s “Project Denver” processor which is based on ARMv8 architecture.

NVIDIA announced plans for both chips earlier this year, but the Tegra K1 “Denver” chip has yet to hit the streets. That should change soon though, and the chip maker is starting to share more details about the processor. 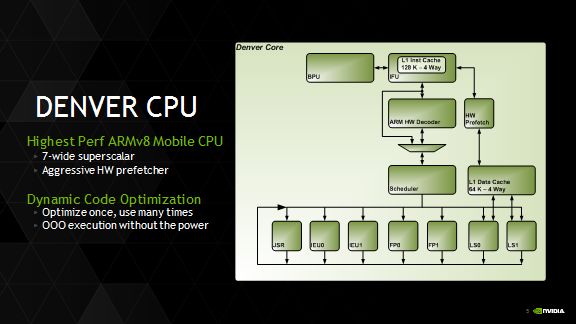 There’s also a dedicated 128MB cache for something called Dynamic Code Optimization which is used to improve performance for frequently used operations. NVIDIA says optimization works with all standard ARM-based apps and doesn’t require developers to make any changes to their software.

While Denver features a dual-core CPU, NVIDIA says it can be faster than existing quad or octa-core processors due to these optimizations and others. The company says we should see PC-like performance in a chip designed for mobile devices.

The first devices featuring Tegra K1 chips with Denver cores should ship before the end of the year, and NVIDIA says it’s already working to support Android “L” which will also launch in the coming months.

NVIDIA isn’t the only company working on chips based on ARMv8 architecture. In fact, most major mobile chip makers plan to launch their own 64-bit processors in the next year or so. But NVIDIA plans to be one of the first to market, and the company is hoping its high performance graphics technology along with its custom processor core will help set its solution apart.