Intel’s NUC line of computers are tiny desktop systems which pack most of the power of a full-sized PC into a package you can hold in one hand. According to leaked documents obtained by Fanless Tech, Intel’s next-gen NUC systems should start to hit the streets in early 2015.

The new “Rock Canyon” line of products will feature Intel Core i3 or Core i5 “Broadwell” chips. They should launch in the first quarter of 2015. In the second quarter of the year we should see the first “Pinnacle Canyon” models will sport lower-power Celeron chips based on “Braswell” architecture. 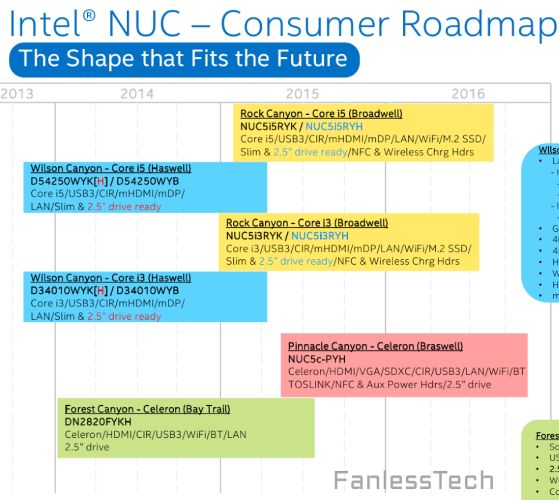 Intel will position the Rock Canyon/Broadwell models as systems that you can use for gaming, home theater use, or home office use. Basically these little systems are fully-functional PCs… just tiny ones.

They’ll feature 5th-gen Intel Core “Broadwell” chips which are expected to offer better performance and lower power consumption than the 4th-gen “Haswell” chips available today. The Core i5 and Core i3 chips chosen for Rock Canyon devices, for instance, is expected to have a 15W TDP. 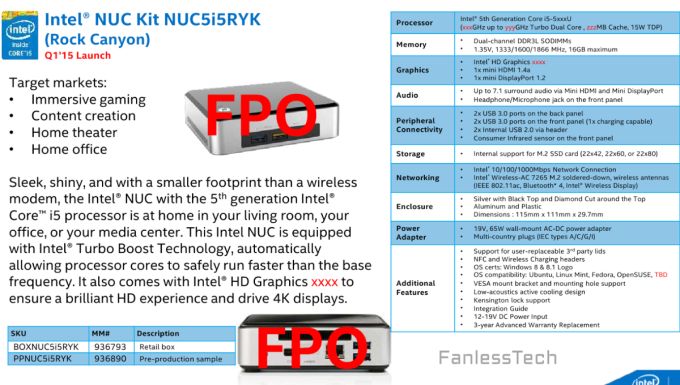 Intel expects to launch several Rock Canyon models, but most should feature 4 USB 3.0 ports, HDMI and mini DisplayPort output with support for 4K video playback or the ability to power up to 3 displays at once. The systems also feature Gigabit Ethernet, 802.11ac WiFi, Bluetooth 4.0, 7.1 channel audio, support for up to 16GB of RAM, and room for a 2.5 inch hard drive or SSD and/or an M.2 SSD card.

Intel’s new “Braswell” chips are the company’s follow-up to the Bay Trail processors for low-power tablets, notebooks, and desktops. Like the Bay Trail family, Braswell chips will likely be available as Atom, Celeron, and Pentium chips. The Pinnacle Canyon NUC kit is expected to have a Celeron processor. 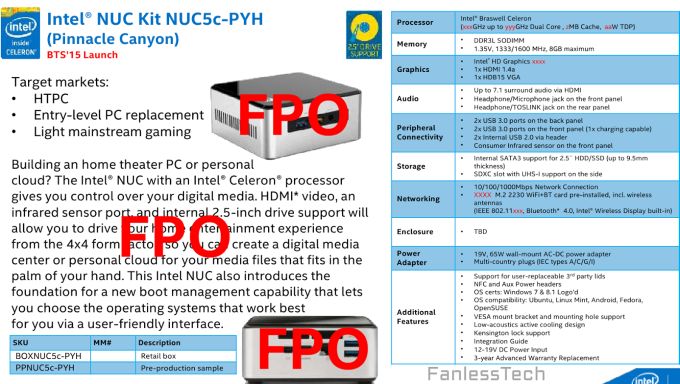 While Intel hasn’t specified the TDP for this model, it’ll likely use significantly less power than the Broadwell versions. But it still supports 4K video playback, features 4 USB 3.0 ports, Ethernet, WiFi, and Bluetooth, and supports 2.5 inch drives. This model has HDMI and VGA ports, support for up to 8GB of RAM.

All of Intel’s next-gen NUC systems due in the first half of 2015 drop USB 2.0 ports altogether, using only USB 3.0 ports. They also all feature support for user-replaceable third-party lids which will let you swap out the cover for a model with integrated support for NFC, wireless charging, or other features.

You can find more slides with product details at FanlessTech.