As expected, HTC is offering its first Android app that you don’t need an HTC phone or tablet to use. HTC Zoe beta is an app that lets you remix photos and videos into short videos complete with effects and music. Then you can upload these videos to the cloud where you can share them with other users or view content shared by your friends… or by strangers, thanks to a “discovery” feature.

The app draws on a couple of features that had previously only been available to folks with an HTC smartphone. But the company’s decision to release Zoe in the Google Play Store and make it available for download on its competitors’ phones is probably the most interesting thing about Zoe. 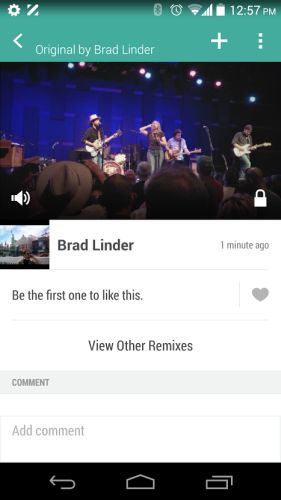 HTC makes some excellent phones, but the company doesn’t ship as many handsets as rivals including Samsung, Lenovo, and Apple. Zoe could be a way to show people who don’t currently have HTC devices what the company can do in hopes of tempting them to buy from HTC when they need a new phone. But apps like Zoe could also present a new source of revenue for a company that’s currently better known for hardware than software.

At launch Zoe beta is entirely free. That’s not surprising for an app that’s still in beta. But it’s possible that HTC could add premium content in the future, letting you buy access to additional themes or music through in-app purchases, for instance.

Zoe is the first app from the newly formed HTC Creative Labs division, but it’s possible we could see more apps like this in the future.

Right now Zoe only seems to officially support a limited number of devices running Android 4.4 or later. That could also change as HTC tests its software with additional devices.

HTC plans to end the beta test and release the full version of Zoe this fall.