HTC makes some of the best Android smartphones available… but they haven’t been best-selling devices in a while. So while HTC tries to compete with rivals including Samsung, LG, and Huawei in the hardware space the company is also investing in a different approach: it will start offering Android apps for competing phones.

The first app from the new HTC Creative Labs unit is set to launch this week. 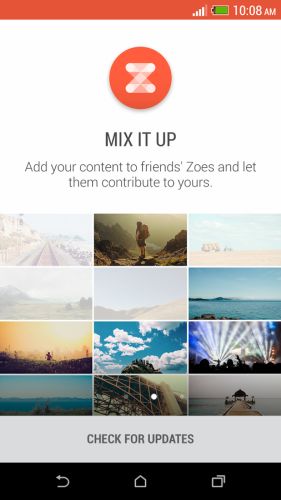 HTC has been making phones and phone software since long before Android took over the market. The company manufactured smartphones and PDAs for companies like Dell before starting to launch phones under its own name.

The company’s Sense user interface made Windows Mobile look pretty and in the early days of Android the Sense UI helped differentiate HTC’s phones from the competition at a time when Android was powerful but not particularly pretty.

In recent years HTC has done more than develop a custom user interface for Android. The company’s camera software is particularly powerful and according to Recode the first app HTC plans to launch for non-HTC phones is a version of the Zoe app which lets you select multiple photos and video clips with and put them together with music and themes create up to a 30-second video.

For the first time you’ll be able to use Zoe on devices from Samsung, LG, and others.

Zoe is just the first app we’ll see from HTC Creative Labs. There could be more on the way as HTC tries to use its apps to build recognition of its brand… or maybe even tries to transition from a company known primarily for hardware to one that makes software. If HTC can’t beat Samsung in smartphone sales maybe the company can shift business models and rely less on hardware sales in the future.